Just about three years ago Seth Meyers was invited to speak at the White House correspondents’ dinner. The video of his speech is above. Saying it is worth your twenty minutes is an understatement. Even if the jokes are somewhat dated to 2011, it’s still laugh out loud funny.

Now, you might be asking yourself why I decided to talk about a speech given three years ago that wasn’t the announcement that the United States had captured and killed Osama Bin Laden. More importantly: Why would I be bringing this up in the middle of winter for no reason? The reason is fairly simple. This speech was the moment Seth Meyers catapulted himself from “that funny guy from Weekend Update” to “essentially my all-time favorite SNL cast member and one of my favorite comedians period.” I knew the guy was funny, really funny. But I didn’t realize he had this in him. This speech was absolute fire and left me laughing to the point of tears on multiple occasions. In fact, I’ve quoted his take on the tightness of Anderson Cooper countless times over the past few years. The video stuck with me. 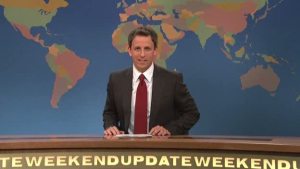 From this moment on I was waiting to see Meyer’s career blossom into something larger, something more than just the anchorman for the most consistent Saturday Night Live segment. He was dynamite as the host of Weekend Update and will surely be missed.

Obviously, I’m writing about his tenure on the show in the past tense. This is because tomorrow will be Meyers’s last episode of SNL. He will be moving to a much larger role, taking over for Jimmy Fallon on Late Night. Meyers almost appears to be bread for this role exactly. His comedic style is the furthest thing from stand up or slapstick. Instead, Meyers is a virtuoso behind a desk. His hiring to replace Fallon (who is taking over for Jay Leno on The Tonight Show) makes almost too much sense. It’s odd to think no one had successfully poached him before now. It would be like leaving Kevin Durant on the sidelines during pickup basketball. The world did understand the massive talent sitting right there waiting for the call right?

Meyers will be officially debuting as the host of Late Night with Seth Meyers on February 24th. I couldn’t be more excited for it either. I’ve been waiting for a traditional late night show host to become a staple of my evenings for the longest time. Meyers is going to end up being that guy for me. He’s tailor made for what I like in a host. There’s an almost perfect chance I will watch him nightly. February 24th can’t get here fast enough. Then I finally get to see the brilliant Seth Meyers get to take the next step in what I’m sure will be a historic late night career. I’ve been sure of it since that White House dinner three years ago and haven’t wavered since.

On a personal note, today marks not only thirty-one straight posts on the blog, but an entire month of 2014 checked off. I wanted to again thank you for reading and supporting the blog this past month and long before it. It’s an absolute blessing that I’ve been able to do what I love day in and day out for the entire year. I love you all. – Connor ❤

Connor Lenahan (@ConnorLenahan) is the founder and editor-in-chief of Connorlenahan.com. He is a freshman at Boston University, majoring in journalism. He can be emailed at lenahan@bu.edu

← Wegmans Over Everything
Casino Night: Or How I Learned I Shouldn’t Gamble →