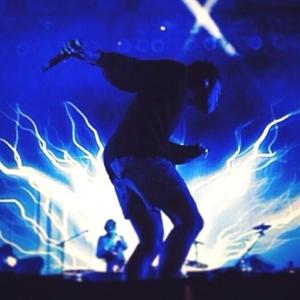 I had high hopes for last night’s Childish Gambino show and they were entirely blown away. From reading around the internet I had been informed that The Deep Web Tour was supposedly an incredible live experience. The internet nailed this notion.

When Donald Glover entered the stage to play the short piano piece “Playing Around Before The Party Starts,” the House of Blues in Boston exploded. My friends Isabella and Brigitte were screaming at the top of their lungs, as was I. We knew the night was going to be special.

Seconds later, Gambino kicked into “Crawl,” the lead track off of Because The Internet, and turned the sold out crowd into a rabid mosh of young adults and Community fans. It. Was. Awesome.

Gambino proceeded to tear through almost the entire first half of Because The Internet in spectacular fashion. Since moving to Boston last August, I have had the privilege of seeing multiple legendary rappers perform live, and Gambino was as commanding of a stage presence that Jay Z was in January. I already knew that Gambino was one of the best rappers alive today, but it was nice to see him perform with the confidence that comes along with said moniker. When Gambino slashed his Usain Bolt like flow on “The Party” the room was speechless.

The latter half of the setlist was dedicated to the slower, more soulful cuts from the second half of Because The Internet. Despite suffering through a cold, Gambino’s voice was on point, killing “Urn,” Telegraph Ave,” and “Pink Toes,” in succession. Closing out the main set were “3005” and “Earth: The Oldest Computer,” the latter of which was one of the best live performances I’ve ever heard. The song is not only a force through headphones, but an absolute stadium anthem in person. I had quietly been the most excited to see “Earth” out of all the Because The Internet tracks due to my (correct) assumptions that it would tear the house down.

Gambino stepped off stage for a few moments. When he returned, he slipped into the beautifully simplistic “So Fly,” indicating the night had now changed it’s focus to the older classics of the Gambino catalog. This is when I started having tears form in my eyes. My two favorite Gambino songs of all time are “Got This Money” and “Heartbeat,” so hearing them back-to-back gave me a joy that is essentially impossible to top.

The performances were incredible, making the night perfect. I did not need anything else. I certainly wasn’t going to argue with “Freaks and Geeks,” “Bonfire,” and an Earth-shattering freestyle over the beat to “m.A.A.d. city” by Kendrick Lamar to end the performance. The concert was mind-blowing not only sonically but visually. There aren’t many photos available online of the tour’s stage setup, and this is more than okay. It’s truly an experience. One that must be felt live to get the entire beauty.

Presumably, this is where the night would end. Thankfully, this assumption was wrong. I had met with Cory Levy, a founder of the wonderful iPhone app One, before the show. We talked about many things ranging from Gambino, to Wisconsin’s chances of winning the NCAA Tournament and everything in-between. Cory had given me a pass to stick around after the show to possibly meet Donald Glover. It took every fiber of my being not to burst into flames due to excitement.

After the show I headed to the ground floor of the House of Blues and next thing you know I’m shaking hands with one of my heroes. Donald Glover is quite possibly the nicest human being I’ve ever met. I took a moment when I was talking to Donald last night to thank him. Over the past few years I have had to rehab through multiple injuries, namely the broken tibia and fibula I suffered last June. Through it all, I used songs like “Bonfire,” “Heartbeat,” and “You See Me,” to fuel my workout playlists. Every step of my recovery, from sitting in my room binge watching Community, to riding the bike at the gym to Camp, to driving around my hometown showing off my regained leg strength to Because The Internet, Donald Glover has been there with me in one form or another. Realistically, he is one of the most important artists to my life, especially the last few years. Meeting him last night was glorious not only to discover that he is a wonderful human being, but an all but too rare moment for me to thank someone who has given so much to my life. Last night was one of the best nights of my life.

Hopefully I’ll run into Donald at Governor’s Ball in June and get to again thank him for improving my life.

← Turn The Lights Out
Attack of the Gobblers →