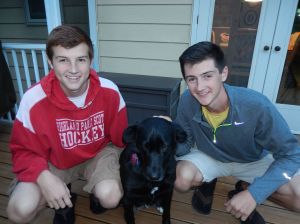 Never doubt the power of Facebook. It can change people’s lives for the better. I have proof.

I entered myself into the Facebook group for students admitted to the Boston University Class of 2018 a long time ago. I had done it for two reasons. One, I wanted to extend my help to all incoming baby Terriers. I remember the group for members of the Class of 2017 being very helpful in getting me ready to move to BU, so I wanted to give the same support. I wanted to pay it forward.

Second, I wanted to know what we were getting. I’ve long been a fan of prognosticating the future. I spend far too much of my time watching recruits for baseball, football, and basketball, while devoting too much of my attention towards professional drafts. While there is no draft for BU students, there is a group that allows you to become better introduced to new students. This works both for fellow new students, as it allows for new friendships and pre-existing relationships before walking into a school with 16,000 people, as well as for current students, so we can begin to understand our newly changed student landscape.

With both the Class of 2017 and 2018 groups, there appeared to be a shared trend. There would be a handful of students that would be heavily active through the group, almost exclusively to make people laugh or answer questions, that would become familiar faces. For me, this exact phenomenon introduced me to some of my favorite people alive today. The Class of 2018 page has some notable names of their own, but none come close to the Hallock brothers.

Andrew and Kyle Hallock are twins from Minnesota. They both were admitted to Boston University, exciting both, because as they each had made clear BU is their shared dream school. I remember seeing their names when they started posting in the group and taking special note of their enthusiasm. That, and their shared sense of humor. They became universally loved thanks to clever, hilarious statuses that won them friends not just in their own class but the ones above as well.

Seeing as these two shared my goofy sense of humor, I took a shine to them. I wanted to meet them as soon as they got on campus. To me, despite the internet being between us, they seemed like great guys. Furthermore, they seemed like the right kind of smart, funny, creative, enthusiastic kids that make Boston University the best place on Earth.

I had seen on the page that Kyle announced he was officially committed. This wasn’t a shock of course, but I fist pumped in my dorm room in excitement regardless. We nailed an awesome guy. But I was struck a few moments later by confusion: where’s Andrew? I had figured that we were most certainly getting the Hallocks as a package deal. That was the agreement. We shook hands on this.

This is when I got concerned. This kid loved BU as much as I did. There was no way he could be considering anywhere else right? He was a Terrier. He was ours. We weren’t letting him slip away.

I came to find out more about the Hallock family and the odd situation they were put in. It’s no secret that BU is a crazily expensive school. It is, of course, worth the money to attend, but is an incredible cost even for those that can afford it. The Hallock brothers were both going to come here. Without aid, the bill would be north of $120,000 a year to get the dynamic duo. Thankfully, BU reached out and gave Kyle considerable aid that allowed him to commit.

Despite coming from a home with a single parent, a single income, and a brother who had received aid days earlier, Andrew was given nothing. He was fighting to get the help he needed to come to the school he belonged at. I watched this unfold. I decided to message Andrew.

“Andrew, I wanted to take a minute to reach out to you because I had read your post regarding financial aid yesterday in the BU group. I’ve gotten notifications about every post in the group for a while and you both continuously made me laugh and made me happy. I love seeing outgoing people interested in coming to BU. You hit that like a sledgehammer to a Christmas ornament. Please, keep fighting to come to BU. We need people like you. Regardless of where you go, you have forever earned my respect. If I can ever be of help in any way to you, let me know and it’s done. Take care my man.”

We exchanged messages for a while that night. My impression of Andrew, which was already spotless, became flawless that night. I talked to a caring, hyper intelligent, wonderful young man that I wanted to see in a Terriers t-shirt next fall more than anything.

A little while later, Andrew posted “the status.”

“Hey everyone, Andy again. As most of you probably know, I’m currently unable to attend BU because of an extremely aberrant financial aid situation in which my twin brother, Kyle, was awarded a need-based grant for around 2/3 of tuition, and I was awarded nothing. Given my family’s financial situation (single parent, single income), it would be impossible for me to pay full tuition next year. That being said, I’m not here to give you guys a sob story. I’m here to ask for your help. Beginning from when I joined this group about 2 weeks ago, I’ve been trying my hardest to keep the posts from stagnating. Most of you are members of other accepted student pages, and you probably know that these groups can get very boring very quickly. I made it my mission not to let that happen here, on the page of my dream school. Since I started posting, I’ve received dozens if not hundreds of messages thanking me for not fitting the mold that these groups usually tend to take on. These messages came not only from students who were admitted to the class of 2018, but also students previously enrolled at BU. As one BU undergrad, Connor Lenahan (hopefully he doesn’t mind me sharing this), said to me in a private message, “I’ve gotten notifications about every post in the group for a while and you both continuously made me laugh and made me happy. I love seeing outgoing people interested in coming to BU. You hit that like a sledgehammer to a Christmas ornament. Please, keep fighting to come to BU. We need people like you.” Not only did I find this incredibly touching, but I found hope in Connor’s message. My numerous appeals may have been denied by the office of financial aid, but there are people at BU who believe I exemplify the model of a Boston University Terrier. The opinion of my colleagues is more important to me than the opinion of the office of financial aid, but unfortunately I’m unable to pay for college with charisma. At the advice of another accepted student, Luis Castro, I decided to ask you all for help. This post and all of its comments will be sent in a personal email to the office of financial aid at BU as a form of petition. Whether you feel that I have in any way demonstrated the exemplary characteristics of a Terrier, or you merely enjoyed a post I may have made to the group at any time, I urge you to both like this post, and to leave a comment explaining why you feel I should be “allowed” by the office of financial aid to attend Boston University. Please refrain from any negative or nonconstructive comments, as I am attempting to keep this as professional as possible. The idea is not to berate or put down the financial aid office at BU, nor the directors of aid who I have personally conversed with. My hope is that a collection of comments from the most important individuals at the university, the students, will demonstrate to the office of financial aid that not only do I want to attend BU, but that the students want me to attend as well. I’d like to personally thank every single one of you in advance, whether you decide to comment or not. You are one of the many pieces of the puzzle that makes me want to attend BU. Not only does the university better the students, but the students better the university. Go Terriers.”

With tears forming in my eyes and pride in my heart, I watched as hundreds of students voiced their support through comments for days and, as of today, 991 people liked Andrew’s message. He deserved it to. This kid needed to be a Terrier more than anyone.

This morning I woke up and checked Facebook out of habit. My half-awakened eyes shot open when I saw this.

If there ever was a moment where “good things happen to good people” was appropriate, this is it.

I’ve said this before, but dammit, I’ll say it again: The students that chose to call Boston University their home, current or future, are incredible. To watch everyone rally around a fellow student who wants nothing more than to inhabit Warren Towers is incredibly heartwarming. People voiced their support out of nothing more than pride in their school and the knowledge that Andrew belonged here, save for Rhyanne Lynch, who hilariously commented her anger that BU was not going to allow her prospective prom date to come to school.

It took a fight, but we got them. We got the Hallocks. They haven’t even stepped foot on campus yet, and they already embody everything great about this school. The world is a brighter place today because everything finally worked out as it was supposed to.

There’s a dinner on me waiting for you when you arrive at Boston University Kyle and Andrew. It would be an honor to finally meet you both. There are thousands more that want the same.

← Throwing the Gauntlet
Staying or Going →