Butterfly In The Sky

If you don’t grow up with Reading Rainbow you are an evil, soulless monster.

Too strong? No. It’s just the truth.

In reality, if you grew up in the past twenty or so years you have inevitably encountered the incredible Reading Rainbow series. Plus, you have at one point or another wished that LeVar Burton would give you a hug because then tears of joy would roll down your face. That is, if you didn’t lock up upon seeing his glorious figure in person.

Full disclosure: This would be me if LeVar Burton and I were ever in the same state. If he ever sang the theme song I actually would start to giggle uncontrollably. This would be how I would die. I have no problems if this is how it ends. How could I?

A few years ago Reading Rainbow went off the air. It’s sad that there are children entering the world today without the program. It is a genuinely delightful, helpful show. In an age where television is dominated by reality television that doesn’t exactly help the public increase it’s intelligence, a lack of a show like Reading Rainbow is all the sadder. Not only are kids missing out on growing up with LeVar, but there’s no counterbalance of intelligent programs for kids. Look I enjoy a show where I can shut my brain off or feel better about myself as much as the next person, but the world is inarguably better when there are people like Kunta Kinte trying to make children smarter.

That’s why I smiled when I saw a link roll across my Twitter and Facebook yesterday. It was a Kickstarter to bring back Reading Rainbow.

It was an admirable cause that I, and every child of the 1990s I know, want to succeed. They were trying to raise a million dollars in the next 35 days.

They broke that mark in 11 hours. As of 8:55 PM tonight here’s where the campaign stands. 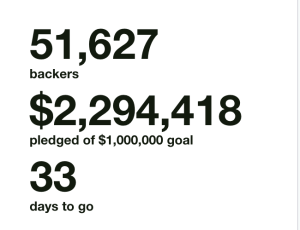 There’s been over $30,000 pledged since I started writing this article. I’d be hard pressed to find a more heartwarming story than this. People coming together to help out an incredible, worthy cause, that makes a difference to millions of lives.

I thought about screenshotting the different aspects of the campaign, but it’s all beautifully outlined on their Kickstarter page here. It’s only redundant for me to, quite literally, copy their entire site.

The charitable donations of thousands will make this program available, for free, to thousands of schools and millions of children.

If there was ever an example of good existing in this world, it’s the people that make Reading Rainbow and the thousands that make that possible.

This is a good day for our world. Let’s be happy about this one.