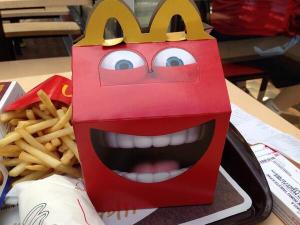 Of all the things I thought I would be introduced to this summer, a demonic, entirely real Happy Meal box was not one of them.

The other day while working at the GSU at Boston University I was first shown the newly redesigned box that would house the pint sized portions in Happy Meals. I was also shown the face of true terror.

Look at this abomination. I’m not exaggerating when I say it is unsettling to an almost twenty year old human male who has handled a broken shin better than a piece of cardboard. It’s legitimately evil. It’s eyes scream “I’m watching you while you sleep,” and it’s gigantic mouth continues “it’d be a shame if something happened while you weren’t looking.”

If you asked me two weeks ago what my biggest fears were they’d have been escalators, bees, and hook hands. Now? All three are this box.

I’m not entirely kidding either. 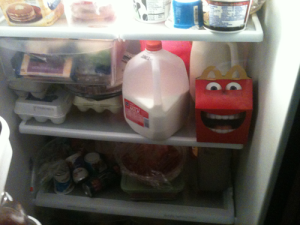 I am not an easily frazzled person. I tend to have a level head most of the time. A gigantic exception to this would be when I’m tired. When I’m drowsy all bets are off. The slightest bump or squeak will have me paranoid. Seeing pictures of the accursed square waiting, plotting, scheming, inside of a fridge is straight nightmare fuel given that there is a mini-fridge 2 feet from my head when I nod off for the evening. If I wake to an anthropomorphic polygon brandishing a butcher’s knife over my person tomorrow I want you to know that I loved you all. 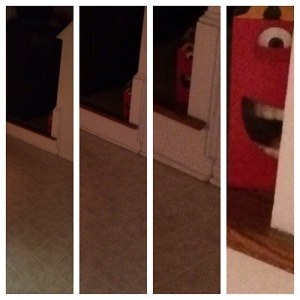 What’s most puzzling is why McDonald’s thought this was a good idea. This is a multi-billion dollar company. They have the resources to make infinity better designs than this. It strikes me that this was made as a joke by an in-house graphic artist named Doug or Scooter to make his friends laugh, only he accidentally attached this file for print as opposed to the real one. This is the solemn explanation.

What’s frustrating is the apparent lack of distribution for the four sided terror. I ventured to the McDonald’s across the street from my room and ordered a Happy Meal in an effort to acquire the box for research purposes. Also, nuggets.

They placed the food in a small bag instead. Sometimes I hate the world. This was probably the best and worst possible thing to happen in this scenario.

So I don’t own an Evil Meal box just yet. 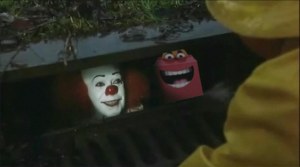 Doesn’t change my lack of sleep tonight though. Wish me luck.

One thought on “Evil Meal”