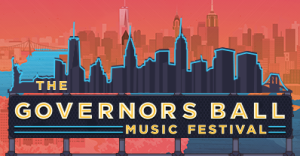 With apologies to my friend Tia Gallinaro, I can not recap Vampire Weekend’s set at Gov Ball. I can’t recap anything that happened on Sunday in fact. I didn’t go for day three.

So we looked at the schedule of who we wanted to see. Earl Sweatshirt and Tyler, the Creator were on in the afternoon. This could have worked in theory, but it would have left me with little time before I would need to get on my train – about 30 minutes driving from Randall’s Island – back to Boston. J. Cole and James Blake would be taking the stage as I was being sped into Connecticut and Matt was being returned home by my parents.

So day three was not going to happen. Instead I spent the day hanging around with Matt and my parents in the city. As much as this weekend was about seeing OutKast, Childish Gambino, and everyone else, it was also about seeing three people I’m very close to.

In January when I bought my festival tickets I did not have my summer job. I was simply going to head from Waverly to New York City and back for the beginning and end of the festival. With my plans changing so did the dynamic of the weekend. No longer would it be three of my only days away from home in the summer. Instead it would be three of the only days I had with my family.

So we walked around the city. Caught up on things that have happened over the first few weeks of the summer. It was awesome.

As much as I’d have liked to be in attendance for day three, I’ll have more chances to see all those artists in the future. Hell, James Blake is a couple blocks from my apartment tomorrow. No, I was perfectly happy with how day three played out. Because I got to see who I really wanted to.

Gov Ball 2014 was an overwhelming success. It was one of the best weekends of my life. And I can’t wait to go back next year, bigger and better than before.