A few months ago I was reading Grantland as I normally do when I came across the following headline from Zach Lowe. 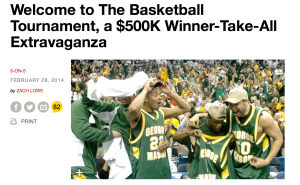 Sold. Seriously find anything wrong with that. High stakes basketball? I’m in 100%. I immediately loved everything about The Basketball Tournament.

Then I read the rules. Any one in the world could enter as long as they were willing to forgo amateur status. This means no current college players. Plus since there was a cash prize the current crop of NBA players under contract couldn’t play. Otherwise you were fair game.

This meant that former NBA players, former college stars, and international stars were fair game. This led to rumors of who would decide to play.

Well the turnout ended up being amazing. Cornell’s team that made the Sweet Sixteen in 2010 reunited. So did Villanova’s Final Four team. Former Boston University stars John Holland and Pat Hazel teamed up for the NYCSuperStars. Smush Parker, who Kobe Bryant absolutely despises, even jumped in. Hakim Warrick, who won a national title with my two favorite childhood players, Carmelo Anthony, and Gerry McNamara, played. This tournament had legitimate star power.

I followed it as best I could online. I hadn’t realized the majority of the bracket would be played in just a few days. By the time I had checked back in the tournament had reached it’s final. Team Barstool, based out of Boston, would be playing host to the Notre Dame Fighting Alumni.

That’s right, playing host. I logged onto the site to find that the location of the final was my backyard. That’s right. The same gym where I announce the Boston University women’s basketball team would be the host to a $500,000 game streamed live on ESPN3.

I started freaking out. I was in disbelief. From the minute I first read about the tournament I thought that it was one of the smartest ideas I had ever heard. Now it was going to be right next door to me. This could not have played out any better. 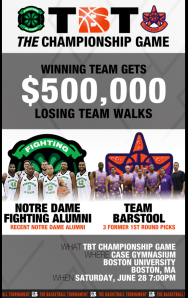 So this Saturday night I will be walking over to Case Gym in West Campus to watch as these teams play for more money than I have ever seen in my life. To say I’m excited is an understatement. Do whatever you can to watch or go to this game.

In fact, I have something special. If you want to come to the game, you can get tickets here. Better yet, use the discount code “TBT10” to get half price tickets. Now you have zero excuse to miss this.

This is going to be an amazing weekend. Hopefully it’s only the first of many tournaments. Maybe next year I get to turn into Connor Callipari and coach my team to loads of cash and glory.

← Unbreakable’s Birthday
Why Not Us? →