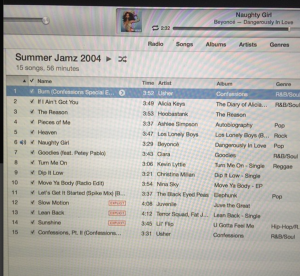 I am preparing to take a vacation. This means that I need music to listen to. Specifically I need a playlist that can entertain me with things that aren’t in my current rotation.

Recently all I’ve listened to are Paramore, OutKast, Steely Dan, and The White Stripes. I need some variety.

Enter Buzzfeed. They published a list of the 15 biggest summer jams of 2004. This is what has become “Summer Jamz 2004,” quite possibly the greatest playlist in human history.

There are two, count ’em, TWO, songs from Usher’s magnum opus Confessions – “Burn” and “Confessions Pt. II.” They bookend the moving experience that is Summer Jamz. You’ve got the beautiful, the talented, the legendary Alicia Keys with “If I Ain’t Got You,” which is one of the best written songs of the past three decades.

Then you have the classic “The Reason” by Hoobastank. This is the greatest song in human history. Fight me. I’m not entirely kidding. I still know every word. It’s amazing. I’ll cut you.

Nothing screams 2004 more than Ashlee Simpson and Los Lonley Boys. Remember when those were things? This was the best year. The. Best. Year. Never topping this.

We even get pre-Jay Bey when she was simply making her way to the throne of the world instead of sitting on it. Also, I’m missing her tomorrow at Gillette Stadium and that makes for a sad Connor.

Then there’s a run of straight gold for dancing with Ciara-Kevin Lyttle-Christina Millian-Nina Sky-The Black Eyed Peas. Also, thanks to my ten year old self loving “Let’s Get It Started” I actually do know the names of all four members of the group. Will.I.Am, Fergie, Taboo, and Apl.De.Ap. If you choose never to speak to me again this is a fair thing to use as justification.

Also, can we all recognize that the beat to “Slow Motion” is one of the single greatest beats to a rap song in history. This is one of the best beats of 2014 and it’s a decade old.

“Sunshine” is the epitome of a song that makes you scream “oh wait I know this” the minute it starts. It’s quietly a classic.

So yeah, props to Buzzfeed for making the perfect playlist. I owe you infinity dollars. Play this on repeat all summer and win life. Easy as that.