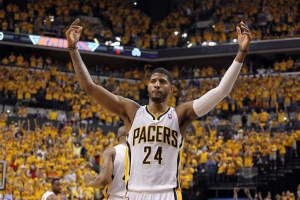 Night owls have already heard the news. For those of you who dozed off last night before around 11PM, I have some sad news to report. During a live, televised scrimmage for the Team USA basketball team on ESPN Indiana Pacers superstar Paul George was horrifically injured. After he jumped to block a James Harden layup in the fourth quarter he fell to the floor as normal, save for his right foot getting caught on the base of the basket. The combination of speed, weight, and angle caused George’s light tibia and fibula to snap. For comparison, this is the same kind of injury that Kevin Ware suffered during the 2013 NCAA Tournament.

I got a text on my phone late last night from ESPN that had informed me that George suffered a “serious” leg injury. I was watching the game about half an hour earlier before I shut it off. I’m extremely thankful I did, as that ESPN text was an understatement. By “serious” they meant “horrific.” Paul George’s shin was destroyed.

My heart sank. Not simply because one of the best players in the NBA had suffered such a gruesome injury, but because I know exactly what that feels like. Hell, last year I broke the same bones in my left leg with a startling similar severity save for how the injury occurred – I was simply walking down a hallway. I’ve broken my shins, each one, twice, for a total of four shattered shins. I would not wish that pain on my worst enemy, let alone a man who made me scream in joy with his play on a regular basis.

This is going to be rough for a while. George already had surgery last night, which is a gigantic step in the right direction. All that’s left now is to play the waiting game.

This made me sad last night. Leg injuries get to me, especially in basketball. My thoughts and prayers are with Paul George until he’s back on his feet and beyond. He’s a strong dude, he can come back. It didn’t stop Kevin Ware, and it certainly didn’t stop me. Paul has got this.