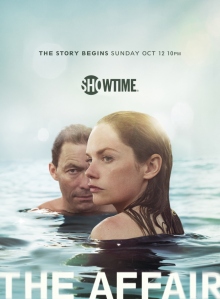 I know almost nothing about The Affair. I know that it stars Dominic West (The Wire), Ruth Wilson (Saving Mr. Banks), Maura Tierney (ER), and Joshua Jackson (Fringe) and that’s about it. I know that the story probably involves an affair of some kind. I’d guess at least. But despite my clear lack of knowledge about the series, which premiered tonight on Showtime, I know I will at least give it a chance because of the opening credits. This is admittedly an insane policy, but this is a special exception. That’s because the opening credits feature a new song from Fiona Apple.

That’s right, a new cable drama featuring new music from one of my favorite artists of all time. Last year I wrote about Fiona Apple and why I love her. This is still the truth to this day. I will follow her wherever she goes. If she endorses The Affair then so do I.

This new song has reminded me of a desire – I need new music from Fiona Apple. After The Idler Wheel in 2012, one of the best albums I’ve ever heard, I have been craving anything new from Apple. The Affair has given that to me. You have more than earned my attention. It helps that the show looks good too.

So a lesson to all those TV shows that try to muscle their way into my life: Just recruit Fiona Apple.