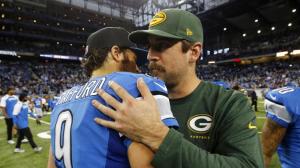 I was the one who offered the trade. I was the one who put it through. I’m the one who feels sick to his stomach over it. For this first time since December of 2009 Matt Stafford is not on the Waverly Chargers. In that time period I had Stafford as my quarterback through good times – (23-3) between 2011 and 2012 – and bad – (6-13) since the beginning of 2013. At no point in that stretch did I win a title with Stafford. That didn’t matter. What mattered is that during that period I fell in love with Stafford as a player. He is far and away my favorite player in the league currently and is high on my list for all time favorite athlete. The man is now a long time part of my life. I get emotionally attached, especially when so many happy moments were given to me by the cannon arm Matty has. It wasn’t you, Matt, nor was it me – it was Jim Caldwell. Caldwell, the head coach of the Lions, announced that Calvin Johnson projects to be out another two weeks with an ankle injury. The unfortunate news about the Lions, a team I have come to root for in the past few years, is that when Megatron sits the offense falls apart. With Golden Tate as a running mate the Lions passing attack is amazing. With Golden Tate as the only wideout that can catch a pass and/or create separation from a defender the team can no longer move the ball. Matt Stafford is “averaging” 300+ points a game but this is heavily misleading. He dropped two big games and has looked mediocre since. Not bad by any means, but he was the #3 pick and has preformed like a second rounder. This is why one day before the XFL trade deadline I made an all in move. After suffering through an aggravating 3-10 season last year I am not in it to just sit back and miss the playoffs just to keep Stafford around. There’s an exceedingly good chance I will draft him again – because the league knows that if they pick Stafford over me I will personally ruin their lives in any and all ways. This year I sit at 3-3 and am the first team out of the playoffs behind other 3-3 teams. Now is the time to figure out if a big move needs to be made, status quo is okay, or the season is all but over. I made my gamble. I’m all in. Title or bust. That’s why I flipped Stafford and a sadly underperforming Cordarrelle Patterson to my younger brother Chase for Aaron Rodgers.

There are only a few hours left until trade deadline time passes for the league and there are a lot of possible moves to be made. Some already have. Matt Bruzzano made his 6th trade of the season this morning flipping Julian Edelman for Kendall Wright, Terrence Williams, and Josh Gordon. This is an intriguing move made out of necessity. Green Bay had just traded for Victor Cruz a week ago only for him to tear his patellar tendon and be immediately declared out for the season. Matt downgraded from an increasingly attractive Edelman to the depth move of Wright (now without Jake Locker) and Terrence Williams (a secondary target on a run-first team). The interesting move is Josh Gordon. We are quickly approaching Gordon’s NFL reinstatement to an already not-terrible Browns team which falls in the late XFL regular season. Matt has obviously been all in for the entire year so far making trade after trade to change his roster for the better, or at least intending to, and this was his big gamble. Should he get back Gordon as JOSH GORDON of 2013 then Green Bay is horrific. Phil Rivers, Alfred Morris, Jamaal Charles, Julio Jones, Josh Gordon. That’s an unreal lineup down the stretch. Should Gordon not perform as GORDON then Matt’s team still looks amazing.

Meanwhile New Orleans is all but finished in their quest to repeat as champions. Now with Jimmy Graham’s injury there is not really enough to overtake the teams at the top of the league at the level he’d need. Can New Orleans win games? Of course – Any Given Sunday is real. Can they go 6-1 from right now to win the minimum amount of games to make the playoffs? No. The talent isn’t there. Bortles/Cousins/Bridgewater is not good enough to overcome the upcoming slate of: R. Wilson, Foles, Palmer, Romo/Roethlisberger, Rodgers, Brees, Rivers. Sadly this is probably also true for New York. Despite being the beneficiaries of the Stafford Gamble they are also in for an intriguing slate: Minnesota, Philly, Seattle, Green Bay, Miami, Washington, Chicago – the first four are a combined (16-7-1). Math is not Chase’s friend as he is the lowest scoring team by more than 400 points this season. His singular win was by a close, 35 point, margin. He needs a miraculous turnaround from more than two starters to even have a shot at avoiding the dreaded 7th loss in the next two weeks. I’m rooting for him, but these guys are letting him down.

Shockingly, the fortunes for the third 1-5 team, Washington, are not as bad. Cary has scored a great deal of points – largely in part because of projected MVP Andrew Luck – only to be caught by bad luck more than once. In fact, Cary has had more points scored against him than any team has scored points for themselves save for Minnesota. Getting back Ben Tate is huge. Running back was Cary’s exposed, bleeding Achilles heel. Tate is the remedy. Cary legitimately has had the game performances to be 3-3 but has encountered bad luck. Who the hell loses while scoring 1400? Apparently Cary.

Miami has to check their team. No punches pulled here. There will be discussions if this team is left unattended again and again for a change in ownership. Not personal, but if you want to play then play. There are owners waiting for their own shot at glory that will check the team. I didn’t realize the #4 wideout in the league, Steve Smith, has not played a down this year in our league because he’s on Cole’s bench. Any necessary moves here probably won’t happen.

Pittsburgh has been covered on here previously as the best underperforming team in the league so a big move would only be made to really shoot for a high seed rather than sneaking into the playoffs. Denver shares a record with Pittsburgh but not an outlook. The challenge trade of Chris Ivory and Nate Washington for Knowshon Moreno has more than backfired for Denver. After waiting out Moreno’s elbow injury they got 15 points last week before Moreno was then placed on IR. To be fair, New York hasn’t fully capitalized on the trade either but Denver could use Ivory bad now. Their other options are a suddenly abysmal Chris Johnson, Shonn Greene (50 points a game), and an injured Rashad Jennings. Add in a still improving receiving corps – Gronkowski and Sanders are a nice combo and Quick is Austin Davis’s favorite target in St. Louis – and this team is really looking for a lot of its wins on the arm of Peyton Manning. There are way, way worse players that are the “Obi Wan Only Hope” for teams right now than Peyton, but he is 38 with neck injuries. That’s being nit picky, yes, but it’s also not false. Denver could really use to make a big deal tonight.

Even the leaders of the pack have needs. Minnesota needs depth like nobody’s business. With Stevan Ridley out for the season they have at most two backup running backs and one of them doesn’t start (Jeremy Hill). CJ Spiller also is falling in stock quickly. Running back improvements to help out the incredible Matt Forte are a key. Injuries have taken their toll to the starting roster, yet shockingly not the record, of the Houston Extreme. Calvin Johnson, Montee Ball, DeAngelo Williams, and Jonathan Stewart are all banged up and/or missing major time. The ability to move either Jay Cutler or Colin Kaepernick for depth and still have a top ten QB makes Houston the most intriguing possible dealer in the coming hours. Seattle lost Darren Sproles for a few weeks to a slight MCL tear but seems to be safe at the moment. Enough foresight and luck have allowed Greg to build a top to bottom solid team – a sentence that shocks everyone, Greg included. The only possible move would be Cam Newton for depth and that’s not necessary. Oklahoma City has endured some struggles by Drew Brees by already making some creative trades (Gio Bernard for Eddie Lacy). This team may have some tough games ahead but they also have the beast of the year/best draft pick of 2014 in DeMarco Murray. Panic and panic trades are not necessary. A move could be made but I can’t come up with one off the top of my head.

Philadelphia has made a few big trades recently (Jamaal Charles for AJ Green and Doug Martin) and look far better than they did a few weeks ago. I’d be shocked if Matt Pettinato made a deal yet again. That leaves Las Vegas, Kansas City, and Chicago. All three teams have considerable assets (Nick Foles, LeSean McCoy, Jordy Nelson, Justin Forsett). The problem is if they are good enough to make a serious run. These three are wild cards. Could Dan Griffith make a few adjustments to try and grab a low seed? Is Dan Schlosser going to move for the lottery again? Is Jason going to try something big? All of these are unknowns. It all depends on the mindsets of three seasoned coaches, two being former champions.

With all of the possible moves out in the league this poses, in theory, to be an interesting trade deadline. Only hours left to go.