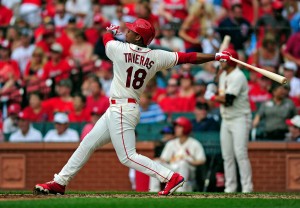 Dammit. What else is there to say right now? Dammit.

Oscar Taveras was the top prospect for the St. Louis Cardinals. He was a potential MVP candidate that would be a fixture in the outfield for years to come. He had shown promise with the bat and the glove in every chance in the majors he had this year. Just a few weeks ago he hit a game tying home run in Game 2 of the NLCS. What’s painful about all of this is that it must now all be put in the past tense.

Tonight Oscar Taveras passed away in a car accident in his native Dominican Republic. He was 22 years old. He was a reason for excitement among not just baseball scouts but baseball fans everywhere that knew that Taveras was something special. They knew that we were watching someone who would be among the best in the game soon enough. When discussing stellar, young outfielders the conversation would include the likes of Mike Trout, Bryce Harper, and Oscar Taveras. Tragically, this is no longer the case.

It’s never a good thing to lose someone who by all means was a kind person. I’d never read a negative word about the guy. To lose someone who was set to bring joy to some of the most dedicated, passionate fans in all of sports for years to come is truly saddening. Hell, I don’t root for the Cardinals and I was excited about getting to watch Taveras play ball. He was going to make the sport more fun. And now he’s gone. That promise is now all but a “what if?” in history.