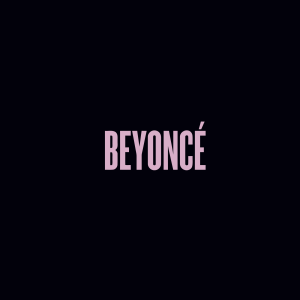 On the evening of December 13, 2013 Beyonce dropped her self-titled album on the world with absolutely no warning. I believe I was asleep when it appeared out of thin air. I say this because I distinctly remember waking up to a great deal of Queen Bey tweets for seemingly no reason before I realized she had dropped an album on the world because dammit she could. The release was brilliant. Beyonce is beyond popular enough to have a move like this work. For example, Jessie J could not drop a new, surprise album that would make that much of an impact on the world. Actually, her normal releases wouldn’t really do that much either. Which is saying something. Most artists out today need to pull off a marketing strategy of some sort unless they are in the pantheon of pop culture where they directly dictate the national cultural conversation when they are ready to bring their world public. The closest thing to the craze over Beyonce possible was the new U2 album that came out just a few months ago – and that was only because it showed up in people’s libraries without permission, not because U2 had a new album. Needless to say, Beyonce had one of the most baller moves of all time in dropping a new, fully loaded album on the world without warning. Like everything in life, if it was fun the first time why not do it again?

Take a seat before you move on. You’ll need to. 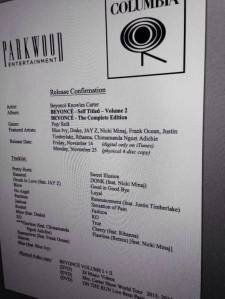 You can rub your eyes in disbelief all you want but what is before you is most likely real. Vulture, among other pop culture powerhouses, are reporting this story. That is not done unless they think that, in fact, Beyonce is going to be dropping a sequel to her 2013 album a week from Friday. This has been a relatively down year for music on the whole – think about it, who has really come out with a “big” album this year? 2013 had Kanye West, Jay Z, Beyonce, Drake, Daft Punk, Justin Timberlake twice, and that’s off the top of my head. In 2014 this hasn’t happened until Taylor Swift’s 1989 days ago. The thought that Beyonce is ready to not only crush Swift just as she was set to take over the spotlight but almost assuredly win the year in music for 2014 is amazing.

Yes, there is the very real possibility that this does not happen. Yes, there is a very real possibility that this is a fake. However, this just seems real. To me this is most likely because the remix to “Flawless” dropped over the summer in the midst of the On The Run tour. Plus she already did it once to great success. Plus, via Vulture, some of the songs have actually been registered with ASCAP – which is not something that signifies an internet hoax.

So make the necessary calls and arrangements to have your world stop on November 14th, because Beyonce is (probably, hopefully) coming whether you like it or not.