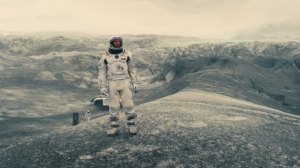 If you are alive today there is a decent chance that you either saw Interstellar, are currently seeing Interstellar, or will see Interstellar soon. This is because every friend I have has at least expressed some interest in seeing the film. This led to a few of those people expressing concern from some of the early reviews. Rotten Tomatoes currently has the movie at 72% Fresh. This is not a terribly high number – in comparison, Nightcrawler holds a 96%. This has led to some doubt and hate about the movie from a variety of sources.

I fall in the original category as someone who has already seen the film – earlier today in fact. Reviews from sources I trust like AV Club and Grantland make their individual claims for their problems with the film and, due to the reputation of the director, Christopher Nolan, his overall career. I don’t wish to address those points in the slightest. I am still too fresh to properly break down the story. My mind is not in the right frame to look at the construction. It is however in the right place to say the following.

The overall intended purpose of movies and going to the movie theater is to be entertained. This is ultimately the goal. With this in mind, Interstellar is one of the most entertaining and engaging films I have seen in a long time. This was, as I expected, a superior voyage into space than Gravity was last year. Gravity was heralded as one of the best movies of the year – I’m shocked the same isn’t 100% true of Interstellar. I wish this wasn’t as there is not a person I know that I would expect not to like the movie.

Don’t be afraid. Do not go gentle into that dark night – rage, rage to the theater and see this thing in IMAX as soon as possible. Screw responsibilities, we’ve got space to explore.