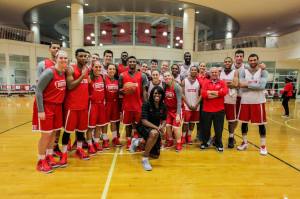 A year ago I wrote an article here on Unbreakable that proved to be life changing. That article, Family, not only brought me closer together with the players on Boston University’s Men’s Basketball team, but provided my start in working for BU Athletics and in turn, creating my relationship with the Boston University Women’s Basketball team. What I didn’t know is how big of a difference a year would make between opening weekends.

Last season I was fortunate enough to become the announcer for the Women’s team by early January. I had apparently done well enough in a fill in role against Marist and Rhode Island that the position was now open for me. This became one of the best experiences of my life as I got to grow as an announcer at the collegiate level while making some great friends along the way. Mollie McKendrick was the first person to reach out from the team to offer me her tickets to any and all games I would want to attend. Not much longer after she offered them I was hired to come to them anyway. From there I became close with Mollie and the rest of the younger players on the team. The three freshmen on the team, Sarah Hope, Courtney Latham, and Meghan Green, were incredibly nice to me and have been to this day. Clodagh Scannell and Troi Melton were similarly amazing to me in my debut season not only as coworkers but as friends. I knew fairly early into my tenure with the team that I felt comfortable with them all. After all, how could I not given that they were all so sweet?

This summer, however, the team changed greatly. Out was the coaching staff that I had worked with the previous year (for reasons better explained here) for a brand new cast of characters. I had no idea what to expect while the school was looking for a new coach and assistant coaches. It was in early June, right in the middle of the summer I was staying in Boston for, that BU announced the hiring of Katy Steding from Cal as the new head coach. In the coming weeks Steding announced the hirings of her assistants – Taj McWilliams-Franklin, Stephanie Tobey, and Cindy Blodgett – as well as her director of basketball operations Amy Coleman. As they all got settled into their new roles as Terriers I got to meet them all. I was overjoyed to find that they were all terrific, nice people. 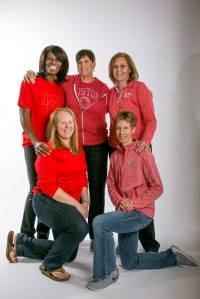 That would even be selling it short. Having now worked closely with BU Athletics for over a year there may not be a group of coaches nearly as fun as the five pictured above. It’s one thing to be kind – this can be accomplished by opening a door for someone behind you. It’s a rare skill to be able to crush it at your job and be hilarious while doing it. This skill serves well for recruiting, as it draws in kids and makes them feel comfortable, as well as in practice, where a coach can tease a player for missing a step in a play only to laugh about it seconds later. The communication to get the job done is there in the most pleasing form possible. It was immediate that I could see the benefits of having these coaches around. They not only knew what they were doing – Steding is a gold medal winner and national champion, McWilliams-Franklin is a WNBA veteran and champion twice over, Blodgett is a four-time All American in the top ten for career scoring in college basketball, and Tobey played for Bryant University – but they were genuinely having fun while doing it. It’s a cardinal rule of life that you should love what you’re doing in life. This is a five-for-five situation.

The players have been loving it as well. Over the summer I spent more and more time with Sarah, Meghan, Courtney, and Troi while Mollie and Clodagh were home in Australia and Ireland respectively. The summer only got more fun once I got to meet and hang out with our new freshmen Erin Bayram, Meghan Doogan, Corrine Williams, and Kara Sheftic. Because the only things we had going this summer were work for me and practice for them I got to see the girls a lot. This allowed me to become closer and closer with them. I got to pick up on fun parts of the team, like the fact that Meghan Green and Erin Bayram are soul mates in their shared insanity. Everyone got along and I got to be there to watch it all.

It is obviously a very different season in 2014 then it was in 2013. New coaches, new players, and a small roster. While other teams can run between 12 and 15 players we only have our 10. In a way, this team and I are kindred spirits in that we are both overly concerned about injury. If things hold even then we both can end up staying safe through the winter and beyond.

I’m just overwhelmingly blessed to get to be around all these wonderful people. They all have been incredibly supportive from the outset. I like to return the favor. They all are some of my favorite people alive. Tonight they play their home opener against Harvard and I’ll be on the mic announcing it. I’m not sure I’ve ever had more excitement to announce a team in my life. Why? Because these people are my favorite. They’re going to be special and I want to be with them every step of the way. 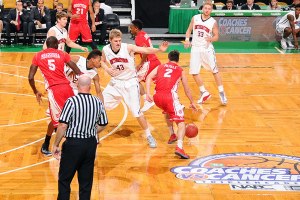 Half of this was to be expected. Going into the Coaches vs. Cancer event last year the team knew that it’s three seniors, DJ Irving, Dom Morris, and Travis Robinson, would be leaving at season’s end after graduating from the university. It was not planned, however, that three other players would be playing their final BU season openers as well. Earlier this year Maurice Watson Jr. transferred to Creighton, James Kennedy to Merrimack, and Malik Thomas to Norfolk State. Even with their departures I knew that I would (and have) remain friends with them. After all, they were instrumental in helping me get back on my feet last year.

Still this meant a brand new look for BU Basketball for the 2014 season. Thankfully things were not as dire as some made it out to be. John Papale was still around to turn into the Human Torch and drain threes from wherever he pleased around the court because he is a capital M Man. Nate Dieudonne would still be patrolling the paint and crushing the will of all would-be opposing rebounders and scorers. Justin Alston would slide into more responsibility and, therefore, more chances to own the paint in every way short of spray painting “Property of Justin Alston” on the inside paint. Those three became the new leaders in the clubhouse. It is and was on them to get the team going over the summer. They excelled not only in getting a suddenly different team to be competitive – going undefeated in a tour of Italy in August – but mesh together well also. Chemistry is key for any team trying to be successful. In fact, this is true beyond basketball and into work regardless of field. Everyone on the team gets along with each other now. Over the summer we would all spend time together as a unit – both the male and female players. By creating a fun environment in which to work it made the work get even easier. That’s why the team obliterated opponents overseas. That’s why they were able to almost upset the preseason CAA #1 team with Cedric Hankerson making his first college start while Cheddi Mosely played his first college game.

It was not perfect. I’d have given anything to allow the team to take a win yesterday, but sadly it was not in the cards. Being the optimist I am I looked on the loss this way: It could have been so much worse. This is cliched but still accurate. This team was playing with an under experienced roster through and through. To be able to come out and look as good as they did yesterday was a great sight to see. There is an incredible amount of talent on the team now. Everyone can and most likely will contribute this season. Given that new additions like Eric Johnson and Cheddi Mosely played well alongside the vets it is easy to be excited about the young bulls. Add in Blaise Mbargorba and Eric Fanning, transfers who have been waiting over a year to finally don a BU jersey, making impacts and you have a team to watch. 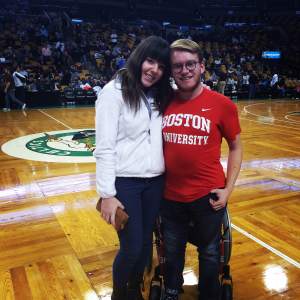 Yesterday also ended one of the most fun projects I have ever worked. After weeks of fundraising and talking non stop about the event I can thankfully report that I was able to win the Coaches vs Cancer fundraising challenge. Thanks to generous contributions from friends and family we were able to raise over $1,800 dollars for the American Cancer Society. It meant a great deal to me to take on this challenge as everyone I know has had to deal with cancer in one way or another in their lives. The thought of helping make that previous sentence a thing of the past was incredible. Thank you to you all for supporting such an amazing cause.

The fun part of the challenge was that by coming in the top two I was able to compete in a shootout challenge against the second place finisher, Professor Jonathan Walton of Harvard. Yesterday I got to meet Prof. Walton and his family and quickly found them to be very kind people. Minutes later he proceeded to destroy me on the court.

My girlfriend Laura LaBrecque was kind enough to film me missing every shot I took during the shootout. Thankfully I was close on a lot of them, but alas, none decided to fall. It didn’t matter. This was still a dream come true. I got to play basketball on the same floor where some of my best friends had only hours before. It’s only dawning on me as I write this that I share a commonality with LeBron James – we both scored a bucket at the Garden this week (James had 41 points against the Celtics while I banked in a layup while warming up, still counts).

I’ve wanted to play basketball for my entire life. Thanks to my bone condition I have never been able to follow through on that dream. At least not in the classic way. Thanks to our Women’s team, our Men’s team, and the support of everyone I know and beyond, I have been able to adopt the “Ball is Life” mentality. I’m not a collegiate athlete, and never will be. But the fact that you could barely tell me apart from those that are is the greatest thing possible. That’s all thanks to the players and coaches from both teams. I’ve been there every step of the way. No matter what happens this year, I’ll still be there next.

Why? Because ball is life.

One thought on “Ball is Life”