Malice at the Palace 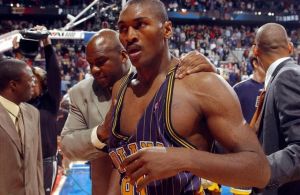 Ten years ago I was arriving back in our family’s hotel room in New York City when I saw a clip unlike anything else I’d ever seen come across the screen on SportsCenter. Even the ten year old version of myself knew that this wasn’t right. It was the immediate reaction to Ron Artest running into the stands and beginning to fight a fan after getting in a fight with Ben Wallace. This was, of course, the “Malice at the Palace.”

A decade later this remains one of the most terrifying things I have ever seen. As someone who goes to basketball games multiple times a week for work it is horrifying to think that a player would go into the stands and begin fighting a fan. I have been a big basketball fan since I was a little kid and I never imagined something like this would or could happen. Hell, I still don’t and I’m writing this in memory of it happening.

I’m not sure that this is something that should command “let’s all learn a lesson from this” takes. I’m confident this is not a laughing matter – Ron Artest against a normal human being in a fight is insanity. Frankly the only way to remember this properly is to remember it happened. Simple as that. Just remember that this was the night that the NBA broke reality. It all felt like some sort of nightmare. It was. We just happened to be awake for it.