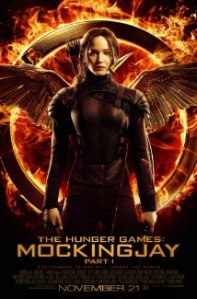 The number of people I know going to see Mockingjay tomorrow is borderline ridiculous. If it were not for our basketball team being preoccupied with playing the University of Kentucky tomorrow I would undoubtedly be spending my Friday night between two D1 point guards while the three of us threw up three fingers for Jennifer Lawrence. Instead, I will be waiting on watching the movie until I go home for Thanksgiving per the request of my cousin Katie, who suggested we see it as a family. I obliged, only because I feel that the fight to get a ticket tomorrow will be close to the mad dash for the last slice of pizza at any Domino’s night at the Lenahan Household. Tears will be shed and blood is possible. But I have a problem with this movie despite knowing close to nothing about the plot.

I have intentionally stayed away from the story of Mockingjay for the same reason I stayed away from Gone Girl. I want to experience them as films. I am far too busy to go and knock out an almost 400 page book only to be inevitably mad when the two do not match up perfectly. I am the antithesis of someone that needs to read the book before seeing the movie. I care about how the movie tells its story, therefore I care about the movie. Changes from source material are not always bad – The Shawshank Redemption ends without Andy and Red reuniting (like they do in the film) in the book version which is a lesser ending.

The extent of what I know about Mockingjay comes from what I saw last year in Catching Fire and the cast list for this movie. Jennifer Lawrence, Woody Harrelson, and Philip Seymour Hoffman are three of my favorite performers with Hoffman being at the top of my list. The cast alone would have my ticket paid for. The need to see the continuation of the Catching Fire plot line is dire. That was one of the better movies I saw last year, which, all in all, was an incredibly strong year for movies. Therefore, no part of my issue with Mockingjay comes from the fact that it exists. It comes from the fact that half of it exists for release tomorrow.

Technically speaking I have been referring to the movie opening tomorrow incorrectly for the past three paragraphs. Tomorrow is the premiere of Mockingjay – Part 1. The movie studio behind Mockingjay, Lionsgate, elected to split the final film into two parts for the most obvious reason of all: Money. If you are at all surprised that George Washingtons are the motivation for this move then you are most likely living under a rock. This makes a great deal of sense as a financial decision for the studio and everyone else involved with the project other than, I guess, Hoffman, who passed away before Part 2 finished filming this past February.

Catching Fire made over $800 million worldwide at the box office, good for a spot in the top 40 highest grossing films of all time. It is no stretch to believe that the two parts to come will each individually top those numbers. This is a trend Harry Potter has proven true. The two-part finale, Deathly Hallows, are the two highest grossing of the Harry Potter series. Part 1 is the 24th highest grossing movie of all time while Part 2 is 4th only trailing Avatar, Titanic, and The Avengers. Seeing this trend line and inserting a similar young-adult book to film adaptation should produce similar results.

This is America and our rules dictate that making money is a good thing. Smart decisions to make money are, in essence, encouraged. It is for this reason that I can’t be outraged at Lionsgate for doing this. If I were the man with the ability to make the decisions I’d be hard-pressed not do do the same thing. When your choices are making one movie that will gross north of $800 million or two that could approach over one and a half billion. You take the latter scenario every single time or you are losing your job. Welcome to how the world works in 2014.

Instead my issue stems from the narrative choice here. The physical copy of Mockingjay clocks in at 390 pages. Admittedly this is a large book to adapt to a singular film until you remember Catching Fire is 391 pages. The precedent for a successful – both financially and critically – adaptation of these books is present. Further, it is present in the incredibly recent past. I still remember seeing Catching Fire in theaters and that’s because it was last year. There’s no reason to split the book up into two because of adaptation needs. It’s purely financial. That’s the problem. Tomorrow will mean there is half a movie playing in theaters. In actuality, Mockingjay will end up being a four hour film to be completed in 2015. This final installment will most likely be terrific, but tomorrow’s premiere will do little else than set up that final two hours. This is what every review title I have seen suggests.

So I know a bunch of people who are paying to see half a movie tomorrow. Ask them if they’d want to pay $15 to see Gone Girl in IMAX for the first hour now and then another $15 next year for the conclusion and the only positive responses would come from people with money threatening to tear the seams of their pants. Tomorrow and next year people will do the same. I am not immune from it either. I openly admit to needing to see this movie. I, and everyone I know, will most likely be entertained by this movie – our collective appetites hungered for the finale. But I’m not going to like it. It’ll just feel wrong.

← Malice at the Palace
Shake It Off →

One thought on “Girl on Fire”