We are officially coming to the end of Oscar season for 2014. This Sunday will bring the Golden Globes while next week will provide the official nominees for the Academy Awards. I have not gotten to nearly as many of the movies in contention as I had last year. This was simply a matter of timing. So I can’t make arguments for or against films like The Imitation Game or The Theory of Everything. Yet. I do plan on catching up on the nominees, but when things like Whiplash are in-between theaters and iTunes I’m left waiting.

So rather than look at the races as battles between things I’ve seen I can have some fun and root for some of my favorites from this year. So if/when Gone Girl has success, for example, I will be excited. But I have my favorite. I have my rooting interest. I have the movie I would like to crash the party. I say crash only in that by popular logic the film I have in mind is making a late push into the Oscar race as opposed to the pre-established contenders. This would be The Grand Budapest Hotel.

I’ve seen Wes Anderson’s Grand Budapest no less than three times this year. I loved it all three times. It’s an otherworldly fun ride. The story is crazy in the best way. There’s a triple layered framing device. There’s made up countries. There are some of, if not the, funniest lines I heard in any movie last year. Best of all, there’s Ralph Fiennes. 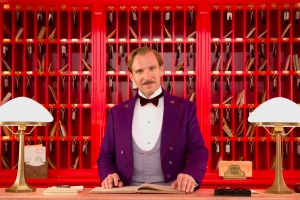 Every time I think over the characters I liked the best in 2014’s films I find myself coming back to M. Gustave. He’s just wonderful. He’s dashing, delightful, dastardly, and dandy. Yeah, I hated that last sentence too, but Gustave would have loved it. He carries the film which is no small task. The cast is loaded (as seen in the trailer below) but Fiennes finds a way to blow everyone else out of the water. He’s been on a hot streak recently on the awards path – he just picked up a BAFTA nomination for Best Actor – and there’s a chance he could make his way into a competitive Best Actor category. He would be heavily deserving. He creates such a wonderful character that it’s impossible to dislike. No one else pulls that role off. That’s what the award is meant for,

So come this Sunday and next week I will be sitting with my fingers crossed especially for Grand Budapest. I have other favorites in contention ranging from locks (Gone Girl, Boyhood, Birdman) to dark horses (Nightcrawler) to long shots (Interstellar, much to my dismay). But Grand Budapest is special. It’s amazing. Had it come out later in the year – it only released a month after the last Oscars telecast – it may have been a frontrunner. It may not come away with much, but the thought and recent opinion that it may make waves brings me joy. Here’s your underdog.