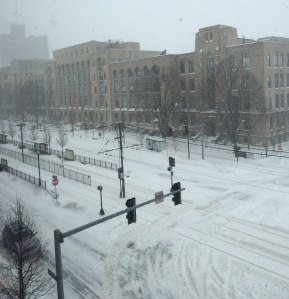 Today was the first time I had been in sunlight since early Monday afternoon, and even then it was fairly cloudy. Despite almost being blinded by the glare off the gargantuan mounds of snow that, no joke, reach above half my body when in the wheelchair it was fairly good. There was significant progress in shoveling. But, almost terrifyingly, there was still work to be done. I had attempted a run to Star Market before being met with around an inch and a half snow still covering the sidewalk. This brought about a concern for me.

Tomorrow will provide the return to classes for just about everyone at BU. I, however, have a fear. Yes many of the sidewalks have been cleared, but not all of them. According to my girlfriend Laura, who made the cross-campus trek this morning, the BU Bridge is not only still covered in snow, but it appears to have been left alone by clean up crews. I had thought the residual snow by Allston and in West Campus was enough to force me to find different routes. But to hear the only way for me to get safely to class tomorrow was borderline inaccessible to someone not using a wheelchair was deeply concerning.

I’ve got a checkered past with the BU Bridge. Last year I got stuck in the middle of the road – four-way traffic – while crossing due to a relatively small bit of slush. I couldn’t cross the bridge without help from strangers for days after. That storm that gave me trouble was only about 8 inches. Juno has deposited north of 24 inches in the city. This is a really bad sign for me.

Look, for as much as I’d want to say I’m completely bulletproof the truth is in the opposite. Thanks to Osteogenesis Imperfecta I need to be careful always. Not just in snow storms, not just in attempted bank robberies, always. The longer and longer I go without a fracture – 6/4/13-Right Now – the more gun shy I get about risking anything. I am exceedingly happy with my life now, the thought of another leg/arm fracture forcing me to completely recalculate my world is the scariest thing this side of birthday clowns.

I really don’t like being lazy. Yes, I like watching Netflix for hours on end as much as the next person, but I need to do something, anything with my time before I start to get a bit stir crazy. I had fully planned on staying indoors for the entirety of the day I’m writing this, but fresh air was the smart call. Plus I’d like to know what I’m up against. It’s one thing to make a blind call – Yesterday I decided I was taking a day off regardless of the University’s decision because I was not about to try to become a human snowmobile and battle winds that make Marshawn Lynch look like an infant. It’s another to just chicken out when it’s entirely possible for me to get around. But I’m not quite sure yet. After being outside today I saw a clean up – headed by the amazing facilities crew of BU – that works for students not in wheelchairs. But I need total clear. I need the ramps on the sidewalks absolutely clean. I don’t get grip on ice, and the risk is me flipping over and/or sliding into traffic.

I remember speaking with my parents before choosing a college about my situation and weather. No matter where I would go – as USC, Miami, and Arizona weren’t on the radar – I would have to make judgment calls on weather things. It’s all about risk and reward. The thought of missing one class becomes so much easier when I think about the possibility of injury. With apologies to my professors, a Spanish class does not qualify as reason for me to potentially break my femur again. I know the pain and recovery involved. I’m not going to lie – the thought of again doing that terrifies me. If it means I back down from something that I could probably handle then so be it. Because uncertainty and I are not friends. Uncertainty gave me scar tissue, certainty gave me the stitches and strength that got me back walking again and again.

There’s a decent chance I’m going to play it safe tomorrow just in case. Again, I’d rather have one busy weekend catalyzed by safety rather than weeks of disappointment in a cast again.

And then there’s Friday. Oh boy. Look, I don’t know what I did to piss off the being that controls weather over Boston, but I’m really, really sorry mister. Scouts honor. 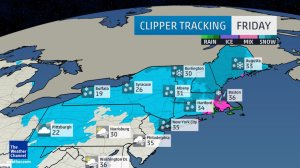 At first glance this is good news. Well, look. Snow is blue and Boston, I think, is in that pinky area. Except that’s possibly worse. Because you can shovel snow. You can move snow. You can’t really do that with ice. You can put more salt on it than a Fenway Park pretzel, but it’s going to cause some havoc. 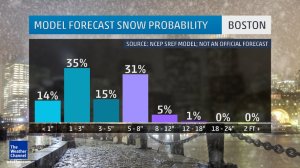 I’m sorry, let me backtrack: I’m REALLY sorry for whatever I did to bring this upon us. My b.

Just what we need, even more snow. I’m astonished to say, given that northeastern schools are supposed to be prepared for snow, but if the timing worked out and the combination with Juno’s residual effects this might end up as a two day week for most. Me? I’m probably going to end up taking Friday off as a precaution only because there’s a decent argument about what’s more unsafe for me: Ice v. Snow. Then again, that’s like saying which way to die is worse: Gun v. Knife. The end result is the same – crying and screaming for my mommy.

What better way to put a cap on the, now official, 6th largest snowstorm Boston has ever seen than by getting more snow. And I came here voluntarily. Good thing the lobster is so tasty and plane tickets to San Diego are so expensive otherwise I’d be out. Be prepared, we aren’t done yet.

One thought on “Juno: Escape?”