While I have had to spend roughly 75% of my time over the past week trapped in my room by the snow I have been productive. By “productive” I mean “playing Backyard Baseball” obsessively. It is a scientific fact that Backyard Baseball is the greatest game of all time. The 2003 version, pictured above, is the pinnacle of the series. It features the perfect set of pros – Barry Bonds, Ken Griffey Jr., Vladimir Guerrero, Alex Rodriguez, and Derek Jeter – and backyard kids – Pablo Sanchez, Achmed Khan, Pete Wheeler, Kenny Kawaguchi, and Angela Delvecchio. 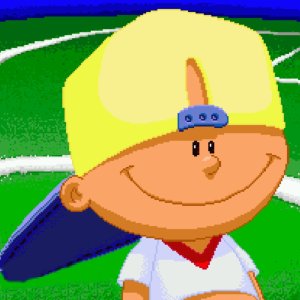 Pablo Sanchez is the greatest athlete of the millennium. This is without question. Pablo is a dominating force unlike anyone else before or since. Pablo makes Babe Ruth look like a chump. Pablo is the epitome of success. I am proud to say that he is the shortstop for the team that my girlfriend Laura LaBrecque and I play with – The Mighty Wombats.

The Wombats are nothing short of a potato sack full of wolverines. They currently stand at 8-0 with absolute domination over their opponents. The Wombats have scored 115 runs – that’s 14 and a third runs per game – and only have given up 8 runs all season. Needless to say, the legendary 1927 Yankees can bite us. We are the greatest, ever, of all time. Want proof?

If you would direct your attention towards the bottom of the picture above you will find the most recent pitching performance from our world destroyer, Angela Delvecchio. She pitched all 6 innings, faced all 18 batters, struck out 14 of them, and completed the unheard of. That’s right, Angela pitched a perfect game. I pitch during the games while Laura hits, so I got a perfect game. I have never been this happy in my life. There wasn’t a player who hit it out of the infield. Damn I’m good. And handsome. Laura obliterated the White Sox for 18 runs. It was domination. They could not contain our machismo.

We are taking all challengers. Get your kids together, we have to settle things the old fashioned way. To be specific, the elementary school way.

Seriously, this is the greatest game.