There is a great perk about Boston University. Each student has an allotment of Dining Points with their standard dining plan. This acts like a debit card that allows for the points to be spent at a number of places around campus, namely the GSU Food Court, and best of all, to order Domino’s Pizza. If one is frugal enough with their dining points then they could easily get as many pizzas as their hearts desire all through their meal plans. It’s a beautiful, beautiful thing. However, today brought about maybe the most absurd pizza journey of my life, and I’m not sure who’s fault it is.

Earlier this afternoon I was looking to eat a late lunch. After the most recent blizzard in Boston I am relatively landlocked into my dorm. With snacks beginning to diminish I decided to order pizza. This would, in theory, act as my lunch and dinner for the day and provide leftovers. I ordered a sausage, bacon, and ham pan pizza. This is better known as “The Single Greatest Pizza of All Time.” Predictably, given that the city is waiting on the snow to be cleared, it was about an hour before the pizza arrived. Once I got upstairs into my room, ready to inhale half of the pizza within seconds I was met with an unpleasant surprise. 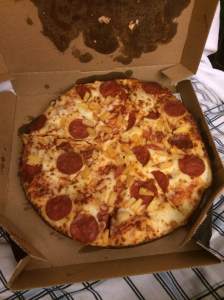 That’s a pan pizza, so it was a third of the way there. But instead of, well, any of the toppings I asked for I got pepperoni and pineapple. Pepperoni I can understand, there were three other meats ordered so this could have been, in theory, a simple misreading for a far more common topping – I’m probably in the minority for people selecting the ham option but it’s just so good. But pineapple? The closest thing to a fruit that was supposed to touch this pizza was a Skittle that I accidentally dropped on it. Yet the store decided to evict Spongebob from his home and give me this pizza. Half of me was convinced it was placed in the wrong box, half of me was upset, half of me was starving. But I decided to just report it to Domino’s, have them refund me for the thing later, and order my pizza again. I had snacked pre-pizza so I could live. 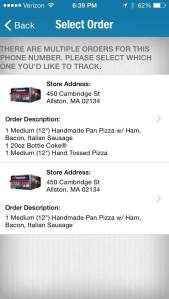 I include this here just to illustrate what happened next. I had tagged on an extra cheese pizza for one of my roommates, Zach, for the sake of saving him an order. The Coke was mine. The pan pizza in the top order and the bottom are identical. The second pizza ended up taking an hour and a half. So we were officially at three plus hours without food for me. I grew cranky. But, finally, Domino’s arrived for delivery number two. 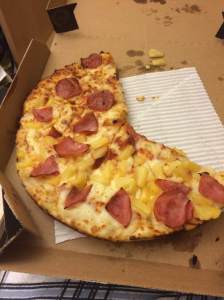 I honestly went blank when I opened the second pizza. It was half pepperoni, half ham and pineapple. I mean, there were a lot of emotions going around at this point. I could have done a lot of things. I could have shouted many things in anger at my pizza. Instead, as you can see above, I quickly devoured three slices because I was so hungry. I mean, I’m not allergic or anything. It’s just to get the same order so spectacularly wrong twice in a row is actually kind of impressive. I mean, the ham got on there this time. They had to have seen it. But in what universe does the translation error change “sausage” to “pepperoni” and “bacon” to “pineapple” twice? That’s when I thought about my order.

I sent both through the Domino’s app on my phone. I figured that maybe the order was mistaken by the app. Maybe that was the cause of the repeated pineappling of my pizzas. But, and I swear this is true, I looked at the box and found this. 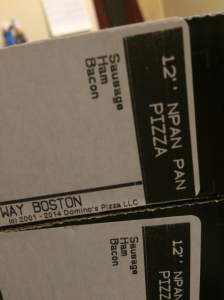 I am speechless. I’m not even sure I’m mad. Sometimes there are just some things that transcend belief. What’s the point in getting angry when I got the food. I mean, within reason. It was still the wrong order – by a lot. But this officially leads me to believe that someone read this order – twice, mind you – and decided that those ingredients were “close enough.”

I’m not sure if it’s cabin fever, or the seven and a half feet of snow outside my dorm, or the fact this pizza isn’t half bad, or the fact I’ve been running a low-grade fever for three days with a head cold, or the fact that I can now taste music as a result of all of this, but I am just going to go sleep now and hope that this is all just a dream.

One thought on “The Pizza”