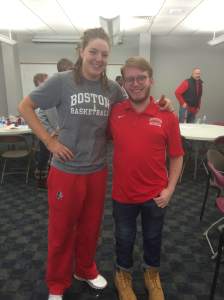 Today was one of the harder games for me to announce here at Boston University. That’s because today, after a terrific four year career, Mollie McKendrick has finished her time in Case Gym as a member of our Women’s Basketball team. Mollie has been one of my favorite people at BU since we first met over a year ago. She’s very much a reason why many of the amazing experiences I’ve had in college have come to pass.

Mollie hails from Australia. Understandably this means that her family is across the world and not able to make it into the stands as much as we would hope for. With this in mind Mollie had reached out to me early in my freshman year when I was just beginning my friendship with the basketball programs at BU. Mollie had seen how much I loved the game, much like herself, and offered to put me on her will call list so I could come watch the girls play all season long. We didn’t realize that I wouldn’t end up needing them for long. Shortly after we had met I got offered the position to be the announcer for the women’s team. Since then I have sat right on the court for almost every game for two seasons.

During these two amazing seasons I have gotten close with everyone involved with the team. Mollie was the first person that had reached out to me and if it weren’t for her I wouldn’t be able to call every member of the team a friend like I do now. Thanks to Mollie I was able to meet and become close with some of the best people I’ve ever met. For this, and for giving me two amazing years of basketball I have been privileged to announce, I am eternally thankful.

I’d be lying if I said I wasn’t a little emotional on the microphone today for Mollie’s last game. But it was deserved. I don’t want Mollie to leave. But, just like everyone else on the team, I’m going to have to accept it eventually.

Thank you Mollie for being one of the kindest people I have ever met. I will always be grateful for you.