From an entertainment standpoint there hasn’t been a player much like LeSean McCoy in my time as a football fan. LeSean tends to absolutely destroy defenders by using only the most visually stunning attacks. The guy runs like a blur and has better control of his body in motion than a Ferrari. I’m not kidding. Here, just watch:

The guy is a monster. I’ve been a fan of him for a few years now. I had him as a fantasy player a few years ago and got to enjoy what will likely be counted as the best season of his career in 2013. Every single Philadelphia Eagles fan I know would take a bullet for the guy without question. That’s what made the news that he’s been traded to the Buffalo Bills so surprising.

LeSean is now a Bill and in return the Eagles got linebacker Kiko Alonso. 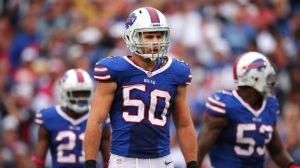 Aside from the fact Kiko Alonso looks nothing like I thought he did, this trade made much more sense when Alonso’s college team was brought up. He was an Oregon Duck under the now-Eagles coach Chip Kelly. Kelly has made much of trying to trade for his own collegiate players that have experience and have bought into his game plan. It’s hard to fault this mentality. If I left one job for another and had some control over my staff I’d pick people that know my system as well. That’s sound logic.

What wasn’t immediately sound was trading the best player on the Eagles in half a decade. Look, you can look all over the internet and find reasons why this is actually a brilliant move for the Eagles. McCoy makes more than triple what Alonso does, counting against the salary cap. McCoy’s career is in its downward trend compared to the history of NFL running backs (He’s 27), and he moves from the best team equipped to have him succeed to quite possibly the worst. Alonso tore his ACL last season but is only 24 and will almost certainly be worth more in the long run. Yes all of this is true and leads even large scale skeptics, myself included, to give Chip Kelly the victory here on paper.

The key is “on paper.” There is a larger part of football, really sports in general, that this trade hits upon. McCoy is beyond a fan favorite. He is the franchise. He’s the only Eagle outside of Jeremy Maclin, who is currently a free agent, that a casual fan would know. Eagles fans, again, would commit multiple felonies if it meant getting a high five from Shady McCoy. The reason I would make a terrible general manager in any sport is that I value the connection to the fans far too much to trade people away. If I ran the Seattle Seahawks I would hand Russell Wilson and Marshawn Lynch blank checks until they qualified for AARP.

There are three levels of this trade:

1. The Football Management Level – For previously mentioned reasons including, but not limited to, salary concerns and career length, this trade is a smart one for Philadelphia and not as much for Buffalo.

3. The Football Fan Level – Dammit, Chip. I just want to watch LeSean McCoy leave defenders lying in defeat behind him. You shipped him to a team that more than handicaps his ability to be a world destroyer. Unless, and this might happen, the team can figure out how to block and suddenly have Sammy Watkins – a football marvel in his own right – and Shady McCoy on their offense. Okay, maybe this isn’t all bad.