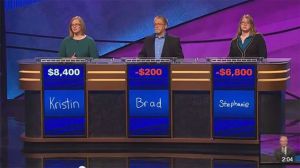 I’m not sure I have the words to describe what happened last night on Jeopardy. The scores above were what the three contestants were left with going into Final Jeopardy. That’s right, Kristin was the only competitor. Stephanie failed in glorious fashion while Brad just missed out. It gets better/worse – Kristin got Final Jeopardy wrong.

This was an absolute train wreck. I can’t take my eyes off of this. It just makes me so happy.