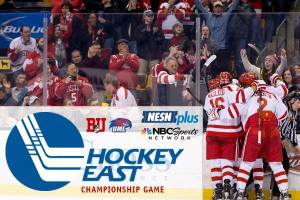 At the time of writing we are not far from the puck drop for this year’s Hockey East championship game between the UMass-Lowell RiverHawks and Boston University Terriers. Based on the fact that earlier this week BU’s own Jack Eichel was named both Rookie and Player of the Year while our coach David Quinn picked up Coach of the Year honors it appears as though the Terriers would be favored to win this year’s tournament. If they did it would be awesome – winning the conference has never been a bad thing. But this season especially it would be another mark of what a special season this has been on Commonwealth Ave.

The Terriers are currently at 24-7-5 on the season, captured the Beanpot title last month, might take home another Hobey Baker trophy through Eichel, and were recently named the odds on favorite to win the NCAA tournament in Las Vegas.

I don’t want to say too much. I just want to say this: Things are going to be very interesting for the next few weeks for Boston University hockey. Time to get ready for some fun