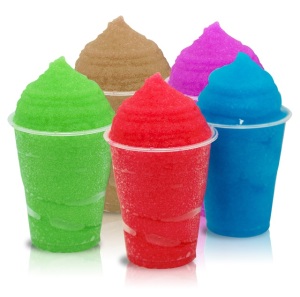 Slushies: Great beverage or greatest beverage? This is a key question that dogs humanity daily. Overall we, as a society, greatly under appreciate the wonder and joy that these slush drinks bring to people across the country. While it may be tough to imagine now, as most of the east coast is still struggling to exit this hellish winter, but during the summer there is not a single choice of liquid that can quite rival the refreshment of a slushie. That’s because you get pure, uncut sugar syrup and a giant cup full of ice. If that doesn’t sound like the cure to the “Too Much Sunshine” blues then you can move right on to Canada, buddy.

Given that my friends and I are idiots with far too much time on our hands we have ventured out for slushies on multiple occasions. However, we are nothing in comparison to my mom, who in her own right is the most loyal customer of Burger King in the country, solely because of their Frozen Coke beverage offering.

Yet my mom cannot even compare to the little girl that left her home alone a few nights ago in search of a slushie. She went as far as to take the bus, by herself no less, to try and get a slushie. Did I mention that the girl in question is 4 years old? Or that this happened at 3AM? Or that she’s my hero?

The people of the bus rightfully stopped this girl from getting too far from home and kept her safe. They also, the jerks they are, denied her the slushie she had ventured out for. Had I been the bus driver I would have swung by Wawa – this all happened in Philadelphia, making it 500 times funnier – and gotten her the treat. If she felt compelled to take mass transit despite the fact that she can not spell mass transit then in my eyes she deserves a reward.

The girl, Annabelle, went from adorable to potential favorite person alive by channeling Marshawn Lynch in her reaction on the bus, only stating “All I want is a slushie.” That is some straight up tunnel vision determination right there. It’s also pretty damn adorable. Can I keep her? I want a slushie now too.

Annabelle is a hero. Thankfully she is home safe and sound, and hopefully she will soon be receiving all the slushies her tiny body can handle.