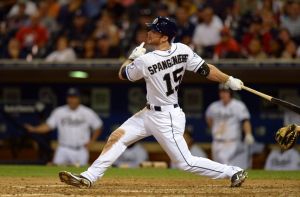 Last year I wrote about Cory Spangenberg, the then San Diego Padres prospect/player who had brought a state title to my high school, Abington Heights, in 2009. This article, “The Superstar,” came on the day he first got a chance to play at the major league level. I had not realized at the time of writing that it would be the first of many occasions. Cory not only succeeded that game, but for the rest of the season he played in San Diego. While taking residence in Petco Park Cory managed to hit .290 with 2 home runs, one of which was a walk off game winner.

This short stint in the majors is still more than I will ever accomplish in my athletic career. The fact that a guy who hit a walk off home run to win a pro game and I share a high school education is cool beyond words. Every single bit of me is jealous, but more importantly every part is proud that a fellow Comet got a shot at the big time and succeeded.

Succeed he must have because today brought the news everyone wanted. As I’m writing this the first game of the 2015 MLB season has just begun in Chicago. Tomorrow will bring game after game in the new season, and Cory will be right there for it. The Padres released their Opening Day roster – only after quickly making one last trade for Craig Kimbrel and BJ Upton from the Braves – with Cory’s name on it. This means that when the Padres take the field against the Dodgers tomorrow one of Clarks Summit’s finest will be out there.

I’ve said it before and I will never stop saying it: I couldn’t be more proud. To watch a guy that so clearly wants to succeed work as hard as he has not only to make our high school prosper on the diamond but to reach his dreams is nothing short of inspirational. Frankly for me this is a motivation like no other. To watch someone that walked the same halls that I rolled through reach his dreams on the largest stage there can be is purely breathtaking. With sports especially there can be a bit of mythology that the greats only come out of large metropolitan areas, but watching Cory shows that anything is possible. No matter if you grew up in a suburb or a suburb of Scranton, PA, surrounded by trees, you can make the Majors.

A giant congratulations to the Spangenberg family for this wonderful news. The only downside to this? The Padres don’t play in Boston this season. I’ll find a way to catch up with our Comet somehow. Until then go Padres, and go Cory.

One thought on “The Padre”