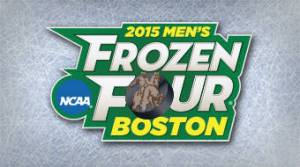 In just about an hour the puck will drop at the TD Garden for the first of two Frozen Four games this evening. Providence and Omaha are the early game today. Four and a half hours from now the latter game, North Dakota vs Boston University, will begin. I’ve gotten lucky enough that tonight I will be in person to watch my school take another step toward a possible NCAA championship. There are only two games left to go. All BU needs to do is win two more games and they will bring home a sixth national title to Commonwealth Ave. This year would be the first since 2009 if the Terriers pull it off.

I’m struggling to think of another time I’ve ever been this excited for a sporting event. The only thing that comes to mind is the Beanpot final a few months ago. That game still gives me goosebumps to this day thinking of the rafters of the TD Garden shaking with the stomps and screams of hundreds of Terrier fans. BU is not exactly an athletics oriented school. There is a loving culture for many of our teams on campus – my experiences here obviously tend towards basketball – however hockey is an exception. The crowds at Agganis Arena for BU Men’s Ice Hockey are incomparable. When the hockey team is good – and this year it’s really good – it’s all anyone talks about. The number of conversations I’ve had about hockey and the Frozen Four in the past week outnumber the amount I’ve had about food and the rest of sports combined. This is all to say that the pursuit of that sixth trophy has consumed BU unlike anything I’ve witnessed in my life.

I couldn’t be happier. To watch everyone come together and root for our guys, and flock in giant crowds to try and get tickets to the games by any means necessary, is amazing. Even with the weather continuing to trouble Boston – every day it’s rain and/or hail – there is a smile on every person’s face. Because we know that the clouds will part and sun will shine down Comm Ave for a championship parade if BU can finish the job.

That’s the beautiful part. We are so close. I approach it the same way that I look at broken bones in my past. I can make it through two more weeks of rehab, or two more weeks in a cast, or two more reps of an exercise. That’s because I see the larger goal in front of me. I know from my casual conversations with BU Coach David Quinn, or Terrier Goalie Matt O’Connor that they are much the same. I don’t know if this is unique to BU, almost certainly not, but it’s a telling part about why the Terriers are here in the first place.

I’m not going to pretend that I understand hockey as well as many people I know. I do not understand how to execute plays or the best way to distract a goalie within the rules to allow my teammates to score. I am not an expert on the game. If there’s anything I can claim expertise on, it’s desire. Eleven broken bones and I’m still going. I’ll be standing in the Garden tonight watching men who I see every day on campus that see the larger goal in front of them. I can see the milestone for me – two years without breaking a bone in June – and they can see it in front of them – winning it all. It’s as clear as day in their attitudes in interviews and their attitudes on the ice. If they weren’t determined to win it all then we wouldn’t have come back to win our last game.

If you’ve followed Unbreakable at all you’ll know one of my key themes is “Anything is Possible If You Try.” We sure as hell are going to try tonight. Let’s go Terriers.