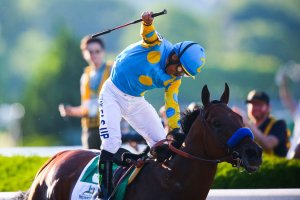 Horse racing is far from America’s premier athletic competition. However, winning the triple crown remains one of the most elusive feats in sports. Seriously, you’d figure that a really good horse and jockey combo could win three races in a row. However, this is far from the case. Up until today it hadn’t happened for 37 years. American Pharaoh is the first winner of the triple crown in close to four decades.

I don’t know much of anything about the nuances of horse racing, but breaking a drought older than I am by a considerable margin is awesome. This is one of the more rare sporting feats to witness. Cool day, no?