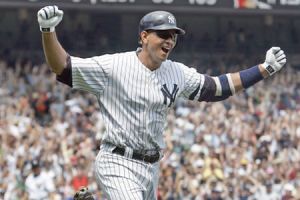 Right now there’s a semi-decent chance that my favorite baseball player is Alex Rodriguez. Bear with me, I can explain. I have this weird disposition where I seem to enjoy rooting for the villain most of the time. Save for, like, Duke basketball, I like the bad guy in movies, music, television, sports, and mostly everything. Can I explain this? Possibly psychosis, but not really.

A-Rod is a special type of bad guy. He might quite literally have no one left rooting for him. Yankees fans hate him and everyone else has hated him for quite a while. His public approval rating has got to be somewhere in the single digit range. He hasn’t exactly done anything to bring it up either. He’s a multiple time steroid user, a liar, an asshole, a narcissist, and everything you could ever come up with that doesn’t lead to jail.

All of that said, Alex Rodriguez has, somehow, thrived this year, in his age 39-40 season after playing not a single inning last year. A few months back he jumped Willie Mays for 4th place on the all time home run list. Last week he became only the fourth man to hit over 2000 RBI. Tonight he got his 3000th hit on a home run, the third man to do so (Wade Boggs and Derek Jeter). The Yankees are doing everything they can to ignore that A-Rod has been dropping milestone moments at an absurd pace.

How does he react? He could not give any less of a shit than he does right now. It’s actually kind of hilarious. That’s what’s making me love him so much recently. A-Rod has now entered the part of his career where he either has given up trying to be liked or is more oblivious to fan reaction than ever. Either way, watching him continuously climb career leaderboards, smirking all the way, is downright awesome.

Don’t get me wrong, I will still hate A-Rod right along everyone else that watches the sport without question. However, right now, it’s downright impossible for me to hate watching A-Rod put up numbers that should not at all be real. And best believe that if he is caught for another steroid scandal then you will be able to kayak in the river of joyous tears I will shed.