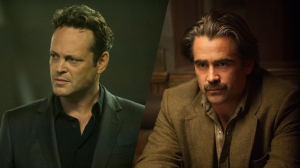 Oh boy, oh boy, oh boy. This is a magical, wonderful night for television. Last year HBO’s True Detective aired its first season and became a smash hit. I mean, given the fact that it had Woody Harrelson and Matthew McConaughey starring it wasn’t that much of a challenge. Still, we got to watch a terrific, engrossing detective story that was one of the most fun new pieces of TV in 2014. I was obsessed with it when I watched the series in, like, three days last summer. Ever since I’ve been waiting, as has every other TV fan, for the second season.

After months upon months of waiting and casting rumors galore, True Detective returns at 9PM tonight with Colin Farrell, Vince Vaughn, Rachel McAdams, and Tim Riggins himself, Taylor Kitsch as the stars. I’ve been sold on this season for a long, long time. Every trailer brought excited giggles.

Now it’s back. This is awesome. Get ready for more mysterious fun, it’s finally time for True Detective season 2.

← Go See Inside Out
Olympic Softball and Baseball? →