The first stop on this summer’s family vacation brought us to Raleigh, North Carolina, and, out of general interest, the campus of Duke. For those that watch college basketball you will already know that Duke is the enemy. Not just of their longtime rival in the University of North Carolina, but for everyone. Duke is essentially Darth Vader’s kingdom. They are the collegiate embodiment of the evil empire. They win, a lot, this year included, and it makes everyone outside of their stone confines sad. Their mascot is a Devil for crying out loud. 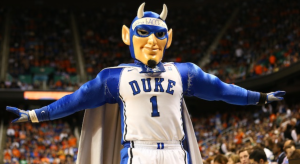 My immediate thought was that I would immediately burst into flames if I stepped foot in the ultimate enemy territory. I mean, Boston University doesn’t even play Duke in basketball, and Duke doesn’t play hockey, so I don’t have an explicit reason for hatred, but it’s just something that comes along with not being a Duke fan. I got out of the car today, quivering in my shoes, thinking that my demise was imminent.

I’m grateful to report that I did not spontaneously combust. In fact, the campus was pretty nice. Good campus (BU) respects good campus. They even brought familiarity to my tummy by way of Panda Express. I even held Duke related clothing without a pentagram appearing before me as my own personal portal to the underworld. Odd, since that was actually in the brochure and everything.

The skies did open into a torrential downpour, however. It was a sign. A family such as mine, one of virtues true-ish, was not to spend much longer in such a dangerous area. We scurried away safe and sound, only for the rain to cease when we arrived on the campus of North Carolina.

If that’s not a sign, then I don’t show what is, but I danced with the Blue Devil and lived today.