My Anniversary with Laura 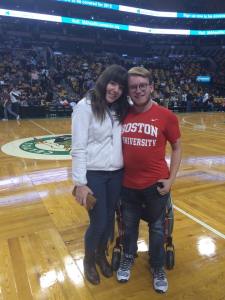 I’m a big guy for anniversaries, at least in that I remember them a lot. Mainly stupid ones really. This November I’ll be having a small party to commemorate the fifth anniversary of Kanye West’s My Beautiful Dark Twisted Fantasy album release. But today isn’t a meaningless anniversary. No, it’s actually the happiest milestone I can think of outside of adding another year between me and a broken bone.

If you’ve read Unbreakable at all in the last year, or seen me in person, or even talked to me briefly, you will have heard me mention my girlfriend Laura LaBrecque. It was today last year that I decided to take the leap and ask her if she would be my girlfriend. She, thankfully, did not reject me and we have been together ever since.

She is, without a doubt, one of the greatest things to happen to my life, ranking among things like my parents, brothers, grandparents, Oreos, Unbreakable itself, peel and eat shrimp, TiVos, sneakers, democratic government, the iPhone 4, and Boston University. I’ve been blessed with many people in my life that are kind enough to help me whenever I need it. However, there are very few that would literally drop everything in their life just to help me with something mundane. That’s not a bad thing, but it speaks to how caring of a person I have with me.

I always am amazed by how many people will ask me about OI, and it’s touching to see. In the past year Laura has caught herself up to my parents and I, to the extent that she not only could hold a conversation with one of my doctors about my status, but could stay step for step in medical knowledge.

When I took her to see Steely Dan, my favorite band since I was a kid, she knew almost every lyric and demanded we go to another concert because they neglected to play “Rikki Don’t Lose That Number.”

Since I forced her to watch the Super Bowl she has texted me regularly about how Tom Brady’s potential absence will effect the remainder of the New England offense, and whether or not Jimmy Garoppolo will survive the four week stretch at the beginning of the season.

Best of all, despite the fact that I’ve had my struggles with confidence, as little as I let on, whether it be with a hard class, my inability to walk across campus (especially in the winter), or just in that – for better or worse – I’m a different person, Laura is always by my side. The only reason I’ve been able to hold up as I have in the city, in college, and away from my family at home, is because I know that I have someone beside me willing to help.

And that’s why I love her as much as I do. Needless to say we have a very healthy relationship. We are endlessly happy because we enjoy being there for one another. It’s exceedingly helpful to me, given that Osteogenesis Imperfecta makes it possible to break a bone at any time, to know that she will do whatever I need to make sure I’m safe and set. And I try the best of my ability to do the same for her, albeit less on the physical end of things.

This is all my longwinded way to say thank you to Laura. I really hit the jackpot with this one, and I can’t imagine what I could have ever done right to deserve her. One year down, and infinity more to go. Thanks Boo, I love you.

One thought on “My Anniversary with Laura”