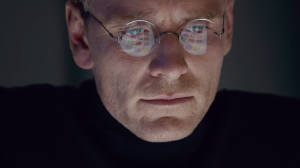 With every passing day we get closer to the release of Steve Jobs, the biopic about the Apple icon starring Michael Fassbender, directed by Danny Boyle, and written by Aaron Sorkin. Not an incredibly long time ago it seemed like this movie would never happen. David Fincher was originally attached to direct. He walked away from the project. A-List actors were cast and recast as Jobs, including Christian Bale and Leonardo DiCaprio.

Finally we are only a few weeks from this film. A new trailer came out today and it further helps cement the thought that Steve Jobs is going to be incredible. All press from screenings has Fassbender leading the Oscar race in the Best Actor category. The film, just on eye test alone, looks set for the Best Picture nominations as well.

Get excited, because Oscar season is upon us at last.

← No, Seriously, I Will Pay Anything to See Idris Elba as James Bond
The Taste of WGBH →