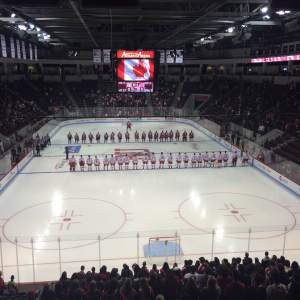 Why must Sundays be the only designated time of the week? Football Night in America is great and all, but I’m stuck here waiting for Sunday to come around for it. At long last, however, the prime attraction at Boston University has returned.

BU is the third ranked team in the country to start the season – Yay! – and they opened up play with a 4-2 victory against Acadia – Yay!

What’s going to be interesting with this team is watching them replace the best player in college hockey, Jack Eichel. Eichel was picked second overall by the Sabres and is now playing in the NHL. Meanwhile last year’s national runner up will be trying to find a way to account for his production which led the nation. That might not be 100% true, but it’s closer to true than not.

Opening up the season with a win is as easy a way to start things off well. I’m the farthest thing from a hockey expert, but I think scoring four goals is a good thing. Winning is even better. But best of all? Hockey Afternoon in America is back.