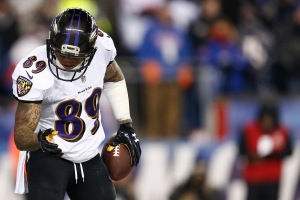 There will be plenty more later this week about the massive injuries suffered by seemingly everyone in the NFL today. Seriously, it appeared as though every team was dealing with a catastrophic injury of some sort. Players like Le’Veon Bell, Matt Forte, and Ricardo Lockette all got knocked out of games in violent fashion today, but Steve Smith Sr.’s injury may have been the most difficult to watch.

Steve Smith Sr. had announced before this season that this would be his last in the league. The 36-year-old decided to have one last run this year to cement his legacy not only as a future Hall of Fame member, but as one of the best of his generation. Only shortly after Smith caught a pass that sent him into the Top 10 ever in receiving yards he caught another and was tackled. He came up clutching the back of his ankle, and suddenly everyone knew the same thing.

The Ravens have since confirmed Smith’s torn Achilles tendon, ending his final season. Given his age and the severity of the injury, it’s likely that this will be it for him. And that’s especially sad given that Steve Smith Sr. is one of the toughest dudes in the league and has been for the past decade. He would play through injury after injury to the point that it was fairly mind boggling how he was lining up each Sunday. If it weren’t the worst possible injury for an aging wide receiver to have, I’d bet that Smith would play in 2016. But it’s not easy to come back from this at 26, let alone 36.

He’s going to go down as one of the best players of this generation without question. He also will forever have a special place in my heart given that he’s 5’9″ and I’m 5’3″ – us short people gotta stick together. But it’s certainly sad to watch one of the loudest, most talented players I have grown up watching go out on anything but his own terms. Thank you for being crazy, Steve. Please, please, please get yourself hired as a commentator ASAP.