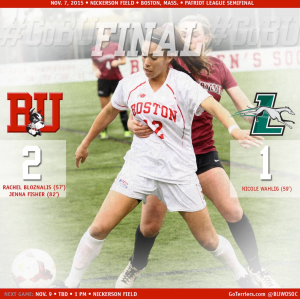 Thanks to a crazy strong showing in the Patriot League this year, the Boston University Women’s Soccer team was the number one seed and the host for the conference championship tournament. After finishing 8-0-1 against Patriot League competition, the Terriers were also strong favorites to do well.

After a hard fought and exciting matchup tonight, capped off with a Jenna Fisher goal in the final minutes to take the lead, the Terriers are on their way to the conference championship game yet again. Here’s where that gets especially interesting: this team has won their conference title in 2007, 2008, 2009, 2010, 2011, 2012, 2013, and 2014. And plenty more before that. But for our sake here, Sunday’s matchup could potentially see the girls bring home their ninth straight championship.

I’m lucky enough to know some of the players on the soccer team and they are all certifiably insane. I mean that as an outright compliment. They are not only exceedingly talented, but unpredictably entertaining as well. To see them, and their wonderfully kind coach Nancy Feldman get a win on Sunday would be the best possible thing.