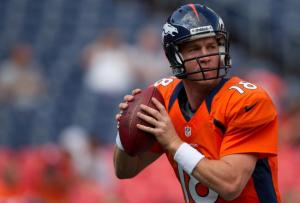 As of yesterday Peyton Manning now holds the NFL records for passing touchdowns and passing yards. He is a Hall of Fame member already, and will likely be voted in with 95%+ of the vote. He is arguably the best quarterback of his era, and unarguably one of the greatest of all time. He won a Super Bowl, reached two more, and has more NFL MVPs than anyone else in history. He also lays claim to the best season by a quarterback – and perhaps player – in league history.

He also went 5 for 20, with 35 yards and 4 interceptions yesterday before being benched for Brock Osweiler in the 3rd quarter. Peyton reportedly has a plantar fascia tear in his foot, banged up ribs, a throwing shoulder problem, and likely more that we don’t know about. Plus there’s that whole thing where he no longer has feeling in his finger tips after four neck surgeries.

I will not lie and say that I am a huge Peyton Manning fan. Quite the opposite, I have never rooted for Manning. However, I respect him beyond all words. There are few to none throughout sports, let alone football, that are more dedicated to their craft than Manning. He will go down in history as a legend, and I will be lucky enough to have been alive for his entire career. In 40 years I will be able to tell the next generation that I saw him play, a lot.

But with that in mind, the history portion of his career needs to start now. Peyton Manning should retire as soon as he could fax the paperwork into the Denver Bronco front office. There is zero part of me that wishes this from a fandom reason. I like watching football with Peyton Manning as a part of it. But now that he is already listed as out for this upcoming Sunday, the writing on the wall has now grown too large to ignore.

Because of the nature of his injury history – again, four neck surgeries – there is a considerable possibility that one blindside hit could paralyze Peyton further. Let’s take a moment to acknowledge that “further” is correctly used in the previous sentence, and agree that this is a terrifying phenomenon. I don’t want to watch any player get hurt, much less significantly. Watching Seahawks receiver Ricardo Lockette and Cardinals tackle Mike Iupati both suffer neck injuries recently is a dark reminder of the possibilities of this sport.

I’m genuinely concerned that Peyton Manning will fall apart before our eyes. For someone that is for all accounts a great human, father, and player, that is a fate I refuse to accept. This is a man who has infinite careers available to him. He could retire to a private island in the blink of an eye. FOX, CBS, NBC, and ESPN would all make him “Bill Gates Wealthy” to join their commentary teams. He could take over as Papa Manning for Papa John. The world is his oyster.

But, again, having 300 pound superhuman athletes out to injure you is precisely what faces him weekly. I have my own injury history with osteogenesis imperfecta, and the thought of being sacked by Tamba Hali rattles my already weakened skeleton in theory. Peyton Manning is far off from my bone density, but I hold a rare upper hand in that my neck has no scar tissue. Additionally, I haven’t spent the better part of two decades being hit by pick-up truck force from defensive ends.

The world of football will miss Peyton Manning, but it will not be without him. There is zero chance he leaves the game without sticking around in some capacity. But his home can no longer be behind center for the Denver Broncos.

Please, Peyton, retire. It’s rare that we get to go out on our own terms in any walk of life, and exceedingly so in yours. Don’t let the window close on you.

One thought on “Please Retire, Peyton”