“I know one thing for sure… Hoyer is not the solution.” That’s the text that Matt Bruzzano sent to me last night as his temporary starting quarterback was removed from action with a potential concussion. Our current #1 seed in the playoffs is without his starter, Andrew Luck, for the foreseeable future, and is in dire need of an answer at that spot. Until then the Blizzard have a tough road ahead. But they are far from the only team that might have some road bumps ahead.

This week brought more clarity to the playoff picture. As it stands now most of the spots are fairly safe in one way or another. Oddly, the New Orleans Tigers are the only team that looks to be in play to potentially steal an 8 seed from Las Vegas. However, this would require the High Rollers going 0-3 to close out the year. That’s what got me thinking.

For this week, let’s look at our eight contenders for this season and examine their remaining schedules. At this point we can be less concerned with who will be in the playoffs. Now it’s all about where they will be. 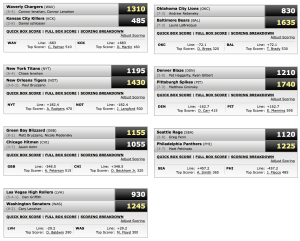 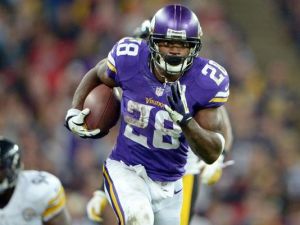 The Blizzard, although currently at the top, seem to be on questionable footing. The aforementioned Luck injury threw everything about this team for a loop. Let’s be honest in admitting this roster looks markedly different with Brian Hoyer at the QB than last year’s leading scorer. Hoyer will almost certainly be cut this week by the Blizzard, and his replacement will have to essentially not suck for the Blizzard to remain a top seed. The Week 12 matchup with the Bears will be a must-watch, as will the season closer between father and son that may knock New Orleans out of the playoff picture. The Blizzard have an outside chance at 11-2, and could in reality finish 8-5. Either record is respectable, but Bru will likely do anything to shoot for the former. If anything, you won’t see me betting against Adrian Peterson any time soon here.

The Senators have one of the hardest season-ending schedules imaginable. The next two weeks will see Cary Lenahan and Co. taking on the top two scoring teams that this season has to offer. Not a terribly enviable position to be in. However, this might almost be a good thing for the Sens. In the best case scenario they will win out and take one of the top seeds. In another scenario they slip back in the pack a little, remaining healthy and consistent as they have been, and become a frisky middle of the pack option. There are clearer choices for late-season juggernauts in this league – Baltimore, Pittsburgh, Oklahoma City – but it’s actually more rare that the favorite wins. The #1 seed has never claimed the XFL title. Because of their upcoming slate, I’d bet against the Senators to take the top seed, and that’s exactly what they’d want.

Oh great, just when the Death Star looked to be losing steam with the injury to Dion Lewis, something crazy happens. Julian Edelman broke his foot this past week against the Giants and will almost certainly miss extended time. This means he’s back for the Patriots come playoff time, but done for the XFL season. That doesn’t make a giant impact – Edelman is on 2-8 Kansas City – but his replacement is Laura LaBrecque’s own Danny Amendola. Let’s all take a moment to punch a wall and ask a critical question: How will this switch impact Tom Brady. Realistically I think that Brady is still going to mow down competition with or without Edelman – after all, Gronk is right there – but it could make things a little tougher. Edelman is one of the best wideouts in the game, and Amendola isn’t. Good? Yeah. Great? Not really. But then again, Brady has put up huge numbers with Kenbrell Thompkins, so we should all be concerned about the suddenly healing Bears Death Star.

Weirdly our reigning champion Andrew Rebensky and his Oklahoma City Lions will have to take on three former champions to close out his 2015 campaign. This seems like a tough order, but given that we all seemingly swung and missed on how Drew Brees would fare this season, I’m officially concerned about the Lions. Brees is currently the number two player in the league, and has looked markedly better than we had collectively anticipated these last few weeks. Thanks to a gift from the gods above, Brees is sitting this week while I take on the Lions, meaning maybe I have a shot of upsetting the champ. One interesting note: OKC has had the least amount of points scored against them in the league. Part of this is obviously luck, but another is not playing the three above squads yet. No matter the result, this is a great post-title season.

This season seemingly more than ever before injuries have effected our teams in the XFL to the point that best laid plans are all but a faint memory. What’s interesting is to see who still has strong positional talent. The answer to that is Pittsburgh, who has TY Hilton or Martavis Bryant playing flex on their full strength lineups. That’s horrifying. Oh, and they casually have Antonio Brown too. Much like in the NCAA Tournament you do not have to be the best team to win. You can steal a title by having some hot hands at the right moment. With the running game largely gone for the Steelers, expect big things from Brown & Bryant, and as a result, the Spikes.

So, Lamar Miller is the third overall running back in fantasy. That’s a thing that is happening now and suddenly Chase Lenahan is looking like a straight-up mystic for taking him in our draft. His out-of-nowhere performance, combined with Aaron Rodgers doing Aaron Rodgers things, has kept the Titans relevant this season. Seemingly the team has had trouble putting all the pieces together all at once this season, but when it has they have scored upwards of 1800 points. That’s not a bad mark. The Titans have a strong chance to finish at 8-5 this year, and that would be Chase’s best finish since 2012, when he won the title. 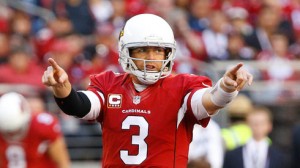 The name of the game for the Chargers from here on out is survival. After losing Le’Veon Bell and Keenan Allen to injury, they needed for people to step up and fill roles. Well, Todd Gurley is quickly becoming the best running back alive, and the Giovani Bernard and Ronnie Hillman combo is at least scoring a little. This team won’t be blowing anyone out of the water anytime soon, but there’s one quietly impressive thing going on in Waverly. The Chargers have only scored less that 1300 points twice this season – Week 1 when they were down half a roster, and Week 2… when they scored 1240. Like we have said before, consistency is key. It might not be pretty, but the Chargers might not be a favorable matchup down the stretch.

Why Tony, what are you doing here? This week brings the triumphant return of Tony Romo to the NFL and potentially the XFL. I say potentially because Romo has seemingly lost his starting gig to Andy Dalton. Right? Romo looked good Week 1, and then got hurt Week 2. Dalton has looked decent to great this year, but, like, he’s Andy Dalton. If I’m Dan Griffith I would be a bit perplexed as to where to go from here. The High Rollers team has been odd this year. Sometimes they look awesome, others they look completely beatable. I’m just happy that I likely won’t have to play them come playoff time due to seeding, because I don’t want to find out what version of this team is showing up.

The past few weeks had included a playoff watch in this section, but seeing as there is really only one team that could come into play for a spot, we are going to forgo that until it becomes relevant again. With that, here are your Week 11 Matchups: