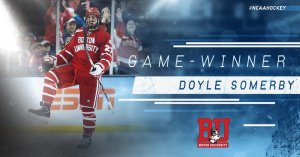 This is an interesting weekend to be a Boston University Terrier that grew up in Pennsylvania. Earlier tonight the BU Men’s Hockey team came back to beat the Michigan Wolverines 3-2 after being down 0-2 to start the third period. This was about as great a win for the team to pick up as possible. Last week brought two straight ties against Providence which, although really exciting to watch unfold, left fans with an anticlimactic aftertaste. I mean, yeah, we didn’t lose, but we also didn’t win.

Beating the Wolverines was terrific as a team accomplishment and event better for yours truly. See I grew up a fan of Big Ten football, specifically Penn State. So with this in mind I have been rooting against Michigan for the last ten or so years. Weirdly I wouldn’t go as far as to say I hate Michigan – frankly if I wasn’t a Penn State fan I would likely be a Wolverine fan, and I believe my dad is the same way – but I definitely don’t mind racking up wins against them. After all, the best football game I have ever seen was Penn State’s 4OT victory against them two years back.

Here’s how this weekend looks: Tonight the Terriers take down the Wolverines in comeback fashion. Tomorrow afternoon the teams play again with a similar result if all goes well. But best of all? The Michigan Wolverine football team will be in Happy Valley to (God willing) get wrecked by the Nittany Lions by a score of around 132-3.

This is a rare occurrence in which I get to root against the same team for around 36-48 hours, and I’ve gotta admit, I really like it.