It’s astonishing that we are already at Week 13 for the NFL & XFL seasons. It seems like just a matter of days ago that I was looking forward to seeing Le’Veon Bell return for my Waverly Chargers when in reality it was just a few days ago that Bell tore his MCL. This has been a long, interesting, and injury riddled season. This week, much like the NFL’s equivalent final weeks, is less about painting the picture than clarifying it. I’ve now said that for weeks, but this is the final step. This week sets the playoff seeding officially, and the week after begins the most stressful time in the world.

This year’s crop of playoff contenders seems to have some interesting narratives for the coaches. We can talk at length about points and players, but the biggest characters in the XFL are our coaches. We have been doing this crazy league for nine years now. We are very, very invested in it. Legacies matter for us. Here’s what our coaches are playing for.

What He’s Playing For: The title he came agonizingly close to winning in 2013. This championship game came before the daily publishing of Unbreakable, so here’s the abridged version. Matt Bruzzano, the loudest, most confident coach in the league made his first championship game in his 7th try. Fittingly, he played his dad, Paul Bruzzano, who had won the 2008 championship on his first time. Matt held a late lead over the elder Bruzzano until a garbage time touchdown sent Phil Dawson to the line for the 49ers. His extra point tied the game and sent the championship to Week 17 for the first time ever, where the New Orleans Tigers won their second championship, and Matt was left waiting. This year is potentially his best shot yet at finally getting a ring. Much to his benefit, no, he can not make any more trades.

What He’s Playing For: Family dominance. Very quietly Cary Lenahan has been one of the best coaches in the XFL for the last few years. This year has been another strong performance for his Washington Senators. This year might ultimately be the one where he gets his championship ring, which would put him in extremely familiar company. Over 8 seasons there have been six champions: Andrew Rebensky, Paul Bruzzano, Dan Griffith, Jason Kohn, Chase Lenahan, and Connor Lenahan. The trio of Lenahans in the league might all end up with rings this Christmas. Well, actually, Cary’s might be literal. The title game falls two days before his birthday and two days after Christmas. Happy Holidays in Washington?

What She’s Playing For: Essentially Tom Brady’s fifth Super Bowl. This year has been all about the Baltimore Bears for two reasons. First, obviously, the Bears have been one of if not the strongest team in the league for much of this year. They still hold a strong lead in total points scored, and will regain Devonta Freeman, Danny Amendola, and (God willing) Rob Gronkowski soon. The Bears also, through virtue of having Tom Brady, Dion Lewis, Brandon Bolden, Danny Amendola, James White, and Rob Gronkowski for part or all of this season, are officially the league’s proxy for the Patriots. Laura could immediately cement herself as a league power, and give Brady & Co. a nice gift at the end of the year, as well as Brady’s first XFL title. 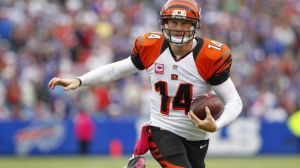 What He’s Playing For: An unprecedented 3rd championship. Given that Paul Bruzzano is out of the playoff hunt as of last week, Dan Griffith is left with the opportunity to win an unbelievable third title in the last nine seasons. Actually, that’s not even true. It would be his third in seven seasons. Even losing Tony Romo again this past week the High Rollers are actually in a pretty good spot with Andy Dalton. As always, never bet against Vegas in the playoffs.

What He’s Playing For: The long-coveted, tantalizingly-close second championship. The Waverly Chargers were the first ever team to win the XFL championship. They then went on to lose a close one to the Las Vegas High Rollers in 2009, and Chicago Hitmen in 2011. Let’s be clear: The last Chargers championship legally comes as part of George W. Bush’s presidency. I’m taking that championship with me back to school after winter break. Try and stop me (stairs would do the trick).

What He’s Playing For: Back-to-back championships. Losing Justin Forsett to a broken arm and then Allen Hurns to a concussion cannot be good for our reigning, defending champion. His Oklahoma City Lions have been sputtering as of late, but championships aren’t won in Week 12. They can be lost, but with 7 wins already in the bag the Lions will be back in the playoffs. Drew Brees getting hot again would certainly be a welcome occurrence for Andrew. But so help me if the Lions and his Ohio State Buckeyes both walk away as champions again.

What He’s Playing For: His deserved legacy. Matt Gronsky has been widely respected as one of the best coaches in the league since he joined in 2010. In that time he has jockeyed between strong seasons coming short and promising teams falling apart. This season brought about one, if not his most, interesting team yet. While consecutive injuries to Marshawn Lynch and Chris Johnson certainly aren’t good, I still wouldn’t want to be on the receiving end of his receivers. David Johnson and Alfred Morris aren’t the prettiest names lining up as RB1 & 2, but all it takes is three wins. Antonio Brown and Eli Manning alone could give you three. Gronsky might be dangerous.

What He’s Playing For: His second title in four years. The New York Titans won the 2012 championship in crazily strong fashion. That team was one of the best the league has seen. Chase would openly admit that this year’s team isn’t the same. However, I am waiting on Aaron Rodgers to explode. The Green Bay Packers are not that good this year, but Rodgers is. The last thing Matt Bruzzano wants to see in Round 1 is his favorite player ready and willing to throw 8 TDs.