My family, friends, and I have played fantasy football together for the last nine years. As pathetic as it may be to admit, this has been my favorite pastime of all for the last almost-decade. By electing to treat the league more seriously than deserved we have had quite a bit of fun. I get to milk our competition for writing material on Unbreakable every week, and it gives a pseudo-legitimacy to the league when those on the outside can follow along. Now as we head towards the playoffs for our league, and our 9th league championship game, we are doubling down on the craziness.

I take this fake sport more serious than anything else in my life. I can say with zero hyperbole that I am more excited about this season’s crop of playoff contestants than ever. The final eight for this season were largely without question the best teams in the league this season, as well as having terrific subplots to follow. You have former champions looking for a return to glory (Dan Griffith, Me), a rookie coach looking to win it all on her first try (Laura LaBrecque), multiple long suffering coaches looking to finally capture the title (Matt Bruzzano, Matt Gronsky), and even strong battles for familial supremacy (Chase Lenahan, Cary Lenahan, Me, again). Not to mention our 2014 champion, Andrew Rebensky, who looks to become only the second person to win consecutive titles and third to win more than one with his Oklahoma City Lions.

Ladies and gentlemen, this playoff season is gonna be lit. From here on out it’s win or go home. No pressure, except for all the pressure. Let’s get ready to rumble. 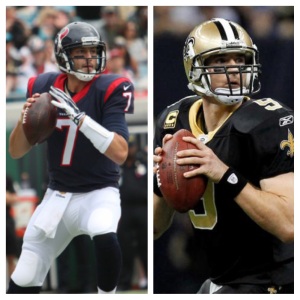 For all of his craziness, Matt Bruzzano sure knows how to coach a fantasy football team. In a season where none of the players he drafted remain on his roster, and 14 different trades were made with his fellow owners, Matt Bruzzano is sitting comfortably in the top spot for the playoffs. After a borderline inconceivable 10-3 finish, the Blizzard get top billing here, despite having more quarterback trouble than any frontrunner has any right to. Andrew Luck was pegged to be the saving grace for this team. While that plan crashed and burned Brian Hoyer, of all people, came out of the ashes like a proverbial phoenix. Hoyer’s recent success with the resurgent Houston Texans (Translated: Throwing at DeAndre Hopkins and hoping he does something amazing) has kept the Blizzard in good shape thus far. Although no number one seed has ever won the championship before, Coach Bruzzano would’t even begin to entertain any skepticism. Like any great leader he will stubbornly continue his methods until the scoreboard reads a Green Bay loss. Plus come on, banking on Adrian Peterson to lead you while trying to win a title with Brian Hoyer is amazing television.

The Oklahoma City Lions have struggled as of late, dropping their last four games after beginning the year 7-2. Even after losing Justin Forsett and Steve Smith Sr. to injury, coupled with the injury issues of other players like Allen Hurns, the championship prospects in OKC seem to be at a season low. Am I insane for still being afraid of the Lions? Have they looked great as of late? No. Does that entirely matter? Also not really. No, losing four straight is not a “good” way to go into the playoffs, but it also isn’t a death sentence. For all the importance we put on regular season records, we are now in a three game season with 0-0 records. That’s it. In fact, Oklahoma City owns a straight up win over Green Bay in 2015, and that’s before Hoyer took the helm for them. Who’s to say the Lions can’t win? Much to Andrew’s benefit, Drew Brees, his gun-slinging ace-in-the-hole, gets to take on the Tampa Bay Buccaneers this week. I’m not saying it will happen or won’t happen, but this Sunday afternoon is going to be exciting for one of these two owners. 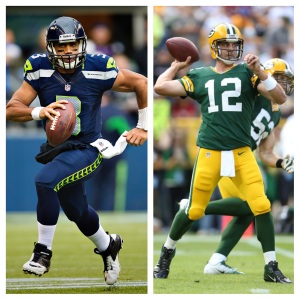 ARE YOU NOT ENTERTAINED? We aren’t even entirely into the first week of the playoffs and this is already my favorite game of the whole season. In one corner you have Cary Lenahan, the much maligned, quietly prodigious talent that many thought had gotten lucky with a 4-0 start to the season. Well a 6-3 finish, with one loss coming with half a team on bye, certainly shut all critics up. Then the suddenly molten-magma hot combo of Russell Wilson and Marcus Mariota happened this past weekend. Cary started Wilson, the lower scoring of the two, and still got 605 from him. The rookie Mariota casually had 725 of his own. The story of this team all year has been consistency. It wasn’t flashy scores or huge names. The Senators just showed up, did Senator things, and ten times this year left victorious. That’s a great way to make a good team. Throwing a hot hand QB out – my personal belief would be that Wilson is the man to start here given the recent Seahawk run – suddenly makes the Senators dangerous more than ever before. Will the Lenahan brothers all have rings come Cary’s 17th birthday, two days after the championship Sunday?

Maybe, but he has to start against his brother Chase, who has a strong chance to make a run to his second championship in four seasons. The frightening thing for the rest of the league about the Titans this playoff season is their recent success. On paper you can point out flaws with making the Titans contenders. They’re the lowest scoring playoff team this season. They went 7-6. Aaron Rodgers wasn’t as lights out as he normally is. All of these are legitimate, and do not matter anymore. Two atrocious games below 800 points don’t look good, but the quiet addition of Markus Wheaton as well as important offensive needs from Lamar Miller and Brandin Cooks give the Titans questions on their roster that weren’t there 9 days ago. Oh, and Aaron Rodgers is in a playoff hunt for the NFC North and has the chance to eviscerate some teams over the last couple weeks, no biggie. I wrote this earlier this year, but Chase has just the right types of players to be uncertain of. If you’re going against Tom Brady you know what you’re getting. I’d rather know my fate then lie awake at night curious if Hall-Of-Fame Lamar Miller or 10th-Rounder Lamar Miller is coming to play. Throw in the blood feud and you have yet another incredible matchup.

It seems extremely fitting that Laura LaBrecque, our rookie wunderkind, has been rolling through this season, scoring almost 3000 more points than the next best team, yet must take on the ultimate playoff gatekeeper in Round 1. I’ve written about this year’s Baltimore Bears a number of times at length because they are genuinely fascinating. Beyond the easy comparison to the New England Patriots – the Bears have/had Tom Brady, Dion Lewis, Brandon Bolden, James White, Danny Amendola, and Rob Gronkowski this season – the mentality of Bill Belichick seems to come through in Baltimore this season. They haven’t been exceedingly healthy, yet have figured out how to maintain things all season. Much was made of Tom Brady’s suspension being overturned, but not much credit was given to the backup plan. Laura grabbed Philip Rivers in case of Brady’s suspension being upheld, and Rivers went on to finish third out of all players. Devonta Freeman and Matt Forte each missed time, and Dion Lewis was lost for the year. Brandon Marshall has been beaten up. Gronk got knocked out two weeks back. Yet I’d still be betting on the Bears to win it all, much like the real life Patriots. They find ways to keep going. This is more indicative that we have a new elite owner to compete against than any. Luck stops when your guys get hurt, strategy begins when you still go 9-4.

But brilliance is executing the evil plan yet again. Dan Griffith is evil, and my ultimate role model. This season the Las Vegas High Rollers did just enough to throw people off their scent. They lost Tony Romo twice to injury, making everyone think that they were primed to collapse. Jamaal Charles tore his knee, well I can live with these scrubs like Andy Dalton and Jonathan Stewart that I got for pennies on the dollar. Lest we also forget that Julio Jones is still putting up great figures in the midst of a spectacular Falcons collapse. It’s all to clear now that this is exactly what the High Rollers wanted. They sneak in around the middle of the pack and get hot right when it counts. Are we sure Dan Griffith isn’t Tom Coughlin? Dammit he’s going to come in and shock everyone for his third ring isn’t he? Maybe, maybe not, but now I’ve officially talked myself into Las V3gas.

We close things out tonight with yet another terrific matchup between friends that would undoubtedly betray each other for this win. Let’s start with the Waverly Chargers, who are likely doomed in this game. At first glance this team has a lot going for it in having Carson Palmer, suddenly regaining Heisman Winner form, and 2015 breakouts Todd Gurley and Allen Robinson helping keep the Chargers alive in the face of the now-infamous Black Sunday injuries to Le’Veon Bell and Keenan Allen. Even with the season going less than stellar in the health department, the Chargers still put up a good 8-5 finish. However looking over the roster there are simply too many questions to view this team as a strong contender. Something is due to go wrong further, and that will send your narrator this season searching for excuses to make. Even with the Chargers inexplicably scoring the most points of any team except for Baltimore, this just doesn’t seem like Waverly’s year.

But Pittsburgh looks invincible. Aside from the real life Giants struggle to close out games the only healthy Manning brother has played up to the big passing numbers we anticipated before the season without the same interception issues that have struck him down in the past. I mean, sure, Matt Gronsky’s squad has lost both Marshawn Lynch and Chris Johnson to injury recently, but the steal of David Johnson keeps the ground game alive for the Spikes. Then there’t the league’s best receiving corps in Antonio Brown and Martavis Bryant, with a pinch of TY Hilton for good measure. How can any team figure to stop those three? This game, while fascinating as a personal matchup, is over. The Spikes will be on to Round 2 with their first ever playoff victory this week.

(Did I do enough to reverse jinx the Spikes here? No? What about mentioning that Matt would not even hesitate to push me into traffic for an Alfred Morris touchdown Sunday? Does that clinch things?)

And here we are ladies and gentlemen with our first confirmed picks for the 2016 XFL Draft. The 10th league draft will be held next August, and will likely include some extra fan fare given the importance of the situation. We hit double digits next summer after all. Here are the first six picks for the 2016 draft, as determined by record and tiebroken by points scored