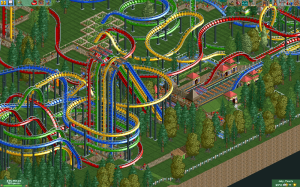 I’m not one for hyperbole, but Roller Coaster Tycoon, the PC game that everyone had as a kid, is the single greatest invention in the history of the universe. The biggest downside to owning a Mac is not being able to play the ports of Roller Coaster Tycoon to PC as of late. I want to make my own park more than ever. Now that I’m more than 9 years old I actually grasp the financials to make a decent park and turn a profit.

However, since I’m still mentally 9 years old I’ll likely forgo that to make rollercoasters to nowhere, or ones that crash and make a lot of fire. Isn’t that why we all play the Sims?

But given my background in studying film and television I have a fascination for well made video of any kind. When I saw that someone made a video about being in the Roller Coaster Tycoon universe in the first person I loved it already. This video is terrific, and the visual effects for it are incredible.

That was dark, and kind of hilarious, but best of all accurate. This video is fantastic and entirely representative of what the game is all about. But I also love seeing what goes in on the back end to make these videos happen.

I really love these things. Here’s hoping that in the near future I’ll be bringing some more visual content to Unbreakable, but that’s something for another day. Stay tuned.