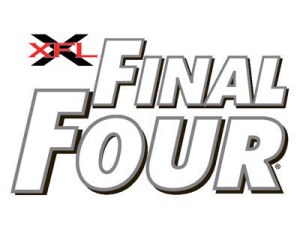 No hyperbole, this year’s Final Four for the XFL is the greatest in league history. I’m not making that judgement from a standpoint of quality of teams – although all four teams have a shot at taking home this year’s title – but rather from a narrative standpoint. There are four possible matchups for the championship, with all having their own incredible storylines involved. Let me make this clear: the “worst” story of the four would be our reigning, defending champion taking on the highest scoring team in the league, coached by a fantasy football rookie.

This is the greatest fake sport in the world.

Today we are going to talk about our remaining competitors and weigh what they’ve got to win and lose over these final three games of the XFL slate. You know what? Let’s go all out. We are such an amazing situation right now that we are treating these games like the headlining heavyweight matchups they are. 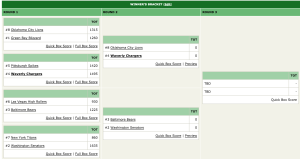 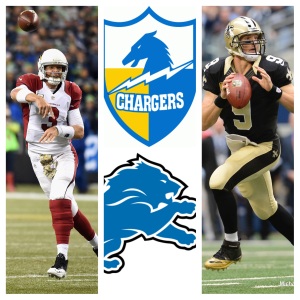 It was only back in Week 11 that the Chargers and Lions met for their regular season contest, and the Lions would likely want it to go as differently as possible this time around. Whereas the first contest ended as a 1995-645 victory for the Chargers, the Lions are now in better shape than they have been as of late. Plenty of fluky things happened in the first contest. First obviously being the 1995 points scored by the Chargers, their season high by nearly 400. Additionally, the Lions were without star quarterback (and former Charger) Drew Brees at QB. Ironically, the Lions were forced to start another former Charger, Matthew Stafford, who had been the QB for the Chargers the previous four seasons, in Week 11.

So where does that leave us now? With an intriguing matchup. The Lions shocked everyone by continuing to the second round thanks to an incredible turn of events on Sunday. Huge games from Drew Brees and Allen Hurns helped the Lions exceed their projected score and put the #1 seeded Green Bay Blizzard on uneven footing. With Brian Hoyer left, needing only an average game for the Blizzard, the Patriots came to Andrew’s rescue, bottling up Hoyer and leaving the 10-3 Blizzard and coach Matt Bruzzano shell-shocked. Needless to say, Andrew pulled off one of the biggest upsets in recent memory, dethroning the Blizzard for the second time this season.

Andrew is clearly in his favorite position. Last season saw the underdog tale of the Lions coming alive late to win their first championship. A calendar year later and the same tale has begun anew. Andrew Rebensky rolled the dice at the draft by taking his two championship stars – Drew Brees and DeMarco Murray – in the first two rounds. While the latter was ultimately traded, the former has kept the hopes of a repeat alive. For historical context, the only back-to-back championships were won by the Las Vegas High Rollers in 2009 and 2010. Two games separate Andrew from exclusive company.

And then there’s the Waverly Chargers. While matched up against what many believed to be the most dangerous team in the XFL, the Pittsburgh Spikes, in round one, the Chargers appeared to have handled them with relative ease going into Monday night. A 575 point lead while Eli Manning was left as the last hope for Pittsburgh, needing to erase the deficit and outscore Ruben Randle and Josh Brown. No small feat, but last night’s 84 yard TD to Odell Beckham Jr. closed the gap more than anyone had thought. Both coach Matt Gronsky and I were speaking about the game as a Charger win in real time, only for the game to suddenly give me four simultaneous heart attacks before coming just short.

There are some positives about the Chargers performance in round one that make this matchup exciting. Todd Gurley sprang back to life last week with 140 yards rushing and 2 TDs. Carson Palmer continued his miraculous season with 580 points last Thursday. Plenty of questions still remain – Darren Sproles and Ruben Randle remain starters here – but that only lends to the drama.

The Chargers have made more Final Fours (6 of 9 all time) than any other team, with a few teams tied for second at three appearances. The Chargers have also made the championship game in 2007, beating Las Vegas, 2009, losing to Las Vegas, and 2011, losing to Chicago. Given that the coach of the Chargers is the Commissioner of the league, as well as the author of this article, much could be made of this, but one thing is true – the drought for the Chargers is becoming increasingly troubling. Their one and only championship came with George W. Bush in office. The last two championship appearances, both losses, came during Barack Obama’s first term. This is likely the best chance since for the Chargers to make the title game again.

What happens now? The Lions have gotten hot at the right time, and may have finally gotten a working combination together in their starting lineups. The Chargers need someone to come through big on Sunday to make up for some weaker links in their roster. This game is coming down to the wire, no other way about it. 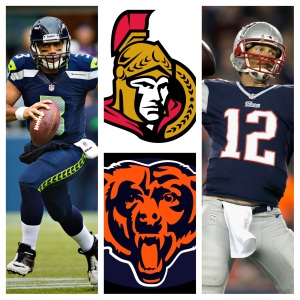 Even with all that I wrote for the Oklahoma City/Waverly game, that’s still not the main event this weekend. We now see two teams that had relatively easy round one experiences go head to head. Earlier in the season the Baltimore Bears handled the Senators without much trouble, but now this game has become a shootout.

Over his last four weeks Senators QB Russell Wilson has been the best quarterback on the planet. He’s “active volcano hot,” scoring 425/705/605/550 while throwing 16 TDs over that span. Needless to say, the early season concerns about Wilson and his slot in the draft – picked in the top 10 while performing under later picks Tom Brady, Carson Palmer, et al. – are gone. Wilson has suddenly changed the routinely solid Senators into a war machine. The much anticipated brother vs. brother matchup in round one underwhelmed only because Cary put such a definitive end to the contest. Since losing to the Bears in Week 11, the Senators have broken 1600 every week. Cary has picked the right time of year to explode.

This makes for an especially interesting situation for the league’s youngest coach. Cary’s never gotten the respect he’s deserved largely due to his age, but he’s been shockingly dangerous the past four years. The Senators have made three of the last four Final Fours, and only narrowly missed last year’s playoffs. The only thing missing from his impressive, young resume is a championship appearance. He’s been close, but hasn’t gotten there yet. A championship victory would shoot him to the top of the list for all coaches, and a championship appearance gets him near the top of the table. This is a key game, because this could change a league dynamic for the next decade. What if the best Lenahan coach is about to take control?

But then again, what if a rookie came and won it all? It wouldn’t be the first time – hell, it’d be the fourth. the 2007 Waverly Chargers, 2008 New Orleans Tigers, and 2011 Chicago Hitmen all won the championship on their first try. The Baltimore Bears and Laura LaBrecque could join that group soon enough. It’s becoming increasingly harder to argue that LaBrecque’s sudden emergence is the story of the season, which is telling given what an unbelievably year this has been.

You take someone that’s never played fantasy before and throw them into an overwhelmingly competitive and unique league with nine days notice. She then goes on to have potentially the greatest draft in league history, taking Tom Brady before his suspension is lifted, two top 13 running backs, two top 5 receivers, Rob Gronkowski, and the third highest scoring player in the league – Philip Rivers – for good measure. Oh, and she somehow swung Dion Lewis into her flex for nine weeks before his ACL tear. A coach that was only just beginning to learn the deeper intricacies of football goes 9-4 while lapping the league in scoring, leading the league with almost 3000 points more than the second highest. No part of the Baltimore Bears season has seemed real.

Yet here we are. Laura LaBrecque is two games away from being the first female champion in XFL history, and capping off a dominant season unlike anything we’ve ever seen.

This game comes down to who can keep hot longer. The Senators have gotten hit by injury late with Mark Ingram ruled out for the season and Greg Olsen suffering a questionable knee injury. The Bears have continued their winning ways, but their recent performances have been less fear inducing then the early season 1700-1800 thrashings. Best of all? Tom Brady gets the Titans defense while Russell Wilson gets the Browns. This is going to be a slobberknocker if I’ve ever seen one.

The winner here will be in their first championship game ever. But in no small way, this is about more. This is the future of the league in these two coaches. It might only be a matter of time before this is for all the marbles, rather than simply some of the marbles.

But where does that leave Super Bowl 9? There are four possibilities in play.

Oklahoma City Lions vs. Washington Senators – Defending champions take on the increasingly hungry challenger. If the Lions emerge victorious, they enter ultra-exclusive company with two straight titles and begin a possible dynasty. If the Senators win, Cary joins his older brothers as a champion and quickly jumps to the most fearsome owner heading into 2016.

Waverly Chargers vs. Washington Senators – The old guard Commissioner older brother takes on the new school little brother. The Chargers walk out with their second title ever, and first in 8 years, or the Senators quickly establish the new legacy. Best of all, the battle of the brothers would be the first all-Lenahan championship match… and be placed directly between Christmas and Cary’s 17th birthday.

Oklahoma City Lions vs. Baltimore Bears – The Lions get a chance to stop Tom Brady from winning an XFL title for a second year. Drew Brees and Tom Brady would get a rematch with the highest of stakes. Again, the Lions could begin their potential dynasty with consecutive victories, establishing that they’re proverbial giant slayers, or the Bears cap off one of, if not the, best seasons the league has ever seen.

Waverly Chargers vs. Baltimore Bears – Boyfriend vs. Girlfriend for the championship… on Christmas. I think this might actually cause the league to explode, and I couldn’t be rooting for it more.

Updated through the first round of the playoffs: