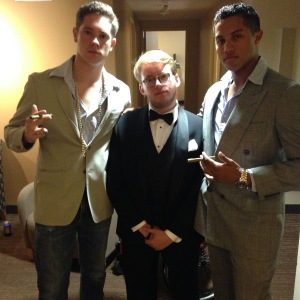 Twenty years ago today two parents in Pittsford, NY gained another son, and I, without realizing it, gained a roommate over a decade and a half later. Yes indeed, today is the birthday of the legendary Patrick McKay. Known to many as one half of Fratrick McAyer, pictured above with me, all coincidentally suited up for no reason, McKay has been my roommate officially for only one year, but it’s really been for all of college. We lived all of ten feet apart in our freshman dorm, then shared a bedroom last year, and currently have singles in the same suite from last year. For some unknown reason, this delightful human being has decided to stick around my insane ass this long.

Pat is one of my favorite people I’ve ever met mainly because he’s kind enough to humor me through all the craziness I put him through. I’ve casted him for more production projects and featured him on more podcasts than he’d likely have anticipated, but we get along too well for me not to make him my go to guy. It’s rare that one would find someone similarly obsessive about sports and pop culture to deep levels, but our shared knowledge of the starting five for the 2003 Syracuse Orange and love of the movie Whiplash are just tips of the proverbial iceberg.

What makes me want to keep Pat around is that he’s a good person. He’s one of the more caring, funny, and infuriatingly intelligent people I know. He’s someone you’d want in your foxhole, only because he would likely know how to best exit that foxhole while making a dirty joke about the term “foxhole.”

McKay is a great dude, and I’m far from the only person that’ll tell you that. This year will likely not be the last one we stick around one another, mainly because where else would we go to discuss D’Angelo’s Black Messiah after listening to it the day it releases?

One thought on “Patrick McKay’s McBirthday”