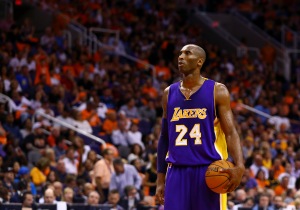 To be completely honest, I’ve never been a huge Kobe Bryant fan. There’s a great chance that I rooted for him more passionately in my uber-NBA fandom as a child, but I’ve had longer, stronger connections to other players – Tim Duncan, LeBron James, Carmelo Anthony, Gerry McNamara, Dwyane Wade, Kevin Durant, etc.

Like nearly everyone I know that’s a basketball fan, however, I find it impossible to deny the impact Kobe has had on the game in his 20 year career. He was a revolutionary force, winning the title in a quarter of the seasons he played in – no small feat. It’s fairly spooky to think that next season won’t have Kobe involved, the first since I was two years old. Although we haven’t had Kobe at his maximum talent in a few seasons.

All that said tonight will make for an interesting and likely sad curtain call for the sure-fire Hall of Famer. Just today Nike released a commercial that perfectly encapsulates the beauty of Kobe. Many hate him, but all respect him.

Thanks for the career, Kobe. This was a lot of fun.

← Why Did Microwave S’mores Take Me So Long?
Early Contender for 2016’s Best Film →