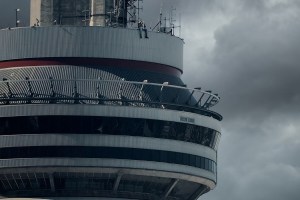 Last night was supposed to be an American holiday, which is funny because Aubrey Graham is Canadian. At midnight the collective mind of the world was focused on one thing – Views from the 6, the fourth album from Drake. Last night marked the end of a long saga of teasing Views that I swear extends back to when Nothing Was The Same, which dropped in September of my freshman year of college. Now one exam away from being a senior we have again been blessed by Drake with more music.

Well, maybe not exactly blessed – let’s come back to this in a second.

Just as I had for If You’re Reading This, It’s Too Late last year I stayed up into the wee hours of the night giving Views its first play. It’s not as if I didn’t have other things to do in the morning either. But Drake trumps all. This was something that I, and apparently everyone I know, had been anticipating for no less than the last six months. This was supposed to be amazing.

Yet I sit here this evening listening to Views again and I’m more frustrated with Drake than I ever have been before. A small portion of this likely stems from the fact that Drake’s summer tour with Future sold out Boston’s TD Garden within a minute this morning, leaving me empty handed for the traveling church of Drizzy. But far larger is the sense that Drake is content where he is now – which is where he’s been for years.

I want to keep the following above board: I explicitly enjoy Views. I don’t at all mean to pose that it’s a bad album, it isn’t. But I am far less concerned with if Drake is going to crank out quality songs or not. His consistency is probably one of the top two personality traits that has him where he is as an artist. But that consistency is starting to actively hurt him.

Take Care was amazing for Drake in the moment because it was a sprawling, varied take on music that immediately put himself into the upper tier of performers. In the five years since its release Take Care remains the best project that Graham has ever put his name to. He now has three albums that follow that are good but not great. That’s because he’s largely content to keep making the same songs.

I’m not accusing Drake of self-plagarism, but rather of refusing to step outside his comfort zone. He has his tracks where he’s the bragging macho Drake that comes to the party with a VIP table and ladies aplenty. He is constantly down in his feelings about a mysteriously ever-growing list of lost loves. He sings, he raps. It’s Drake. You know what you’re getting, and that’s the issue.

Drake does not take artistic challenges. The most uncanny song on the album for him is maybe “One Dance,” a dance track that would succeed if you had Rihanna, Jeremih, PartyNextDoor, Big Sean, Future, and really anyone else you could think of as a peer on. It was a safe bet to be a hit. The most entertaining song is “Views,” to me, because it has Drake popping off some angry bars over a great beat. But a lot of the album is good bars and good beats. That’s not a classic, that’s an 8/10. That’s fine and all, but this is a guy who is capable, and should be expected to produce 10/10, especially given that Views has been in production for two years. But we are stuck with something that’s not that far removed from both of his last two releases.

The most compelling Drake has been the last year and a half has been on If You’re Reading‘s “6PM in New York” and “Back to Back,” where the normally non-confrontational Aubrey Graham started to fire shots like never before. There was venom here like never before. The guy has a catalog of forty songs that could be played at the cookout that would connect. That’s a huge accomplishment, but these are songs that change the perception of an artist. If you can write a vicious verse or three then suddenly everything changes. Think of “Ether” by Nas, “Diamonds From Sierra Leone” by Kanye West, “Control” with Kendrick Lamar’s feature, and “U Don’t Know” by Jay Z.

You might not like Yeezus and/or The Life of Pablo but shit, at least Kanye swung for the fences on both – by my ear he hit a grand slam both times. Beyonce just completely changed my opinion of her by becoming the best country singer and rock singer alive on LEMONADE while expanding upon her previous works. Drake keeps retreading the same ground – which is entertaining ground certainly – but we don’t get anything from it. Drake might have thrice the hits, but I am becoming increasingly pessimistic that he will make a piece of art as incredible as To Pimp A Butterfly like Kendrick Lamar did.

Drake doesn’t need to become a giant social activist or suddenly start to force messages into his songs just to do them. He just needs to evolve. For example, after five years of listening to him lose every single love interest and question himself you stop wanting him to find love and star considering if maybe this is Aubrey’s fault after all. It’s tough to look at this guy the same as when he was changing from Degrassi when he is basically the public face of the Toronto Raptors, the city of Toronto, Jordan Brand, and the most popular rapper on the planet by a country mile. This is a guy that could buy anything he wants. When Kanye hit that level he made Watch the Throne as a testament to speaking with credibility on excess. Drake is making vaguely similar dance tracks that become more interchangeable.

And all of this is about an album I genuinely like. Views isn’t bad, nor is Drake. But we are reaching a point where even I, an avid, extreme Drake supporter for the healthy majority of his career, is getting somewhat bored. I’m not asking for an acoustic ballad album, but I just need a risk. This guy has all the public trust in the world. Gamble on something for once and grow, or fail and continue to be beloved. It’s low-stakes and high-reward. Maybe we won’t see it, which would be disappointing. I guess this is just views from frustration after all.

One thought on “Views From Frustration”