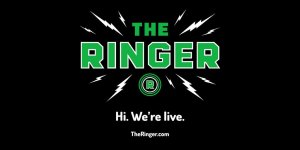 Who knew Christmas was on June 1st? There’s been a large hole in my heart ever since the end of October last year, and unlike the last one this was not caused by overconsumption of bacon. When Grantland, the site that inspired me to become a writer, was shuttered by ESPN last fall ended I was crushed. Grantland was a hub for everything I loved, from writers to content. Most of my cultural identity was shaped by suggestions and articles from that site. I’ve needed something like Bill Simmons’s curated crew in my life ever since.

Today my prayers were answered. At long last Simmons’s new site, The Ringer, launched. It’s much different than Grantland already – that green is genuinely beautiful – with new areas of coverage including tech news and politics. It’s fascinating, honestly. There’s a new feature on The Ringer, courtesy of their host site Medium, that tells you how long it will take to read an article on average. While this number would fluctuate on your reading speed – mine is oddly quick – it does help you gauge how long you’ll need for a piece on the front end. Bryan Curtis had a piece on Joe Buck today that clocks in at 20 minutes – 20 exceedingly entertaining minutes.

It will be very fun to watch this site grow over the next few months, but for today I’m just going to smile because I’ve got that hole filled at last. The bacon one, however, is still pending.