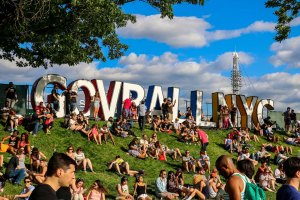 This weekend was supposed to have culminated in seeing Kanye West live tonight at Governors Ball. We would have seen him take the main stage for the first time since 2013 and perform songs from The Life of Pablo. Yet that wasn’t meant to be. Governors Ball was rained out today because of threats of thunderstorms.

It would be infuriating to focus on the thought that thunderstorms never materialized in the city and outside of rain it would have entirely worked. No lie, I’m upset about it, but in the moment that they made the call it was the right one.

Look, I loooooooove Kanye, but I’m not about to celebrate three years without breaks by getting hit by lightning.

Instead we – my girlfriend Laura LaBrecque, my brother Chase Lenahan, and I – got to catch a handful of artists the last two days. Beck, Of Monsters and Men, Action Bronson, The Strokes, Mac Miller, Miguel, and surprise standout De La Soul all were terrific. Plus we ended up getting some festival-exclusive Kanye merchandise so the weekend wasn’t a loss in any way.

Now we are going to have to make up for the acts we are missing today – Kanye, Gary Clark Jr., Vince Staples, and Eagles of Death Metal among them – but that’s not impossible.

← Three Years, No Breaks
Brock’s Back →