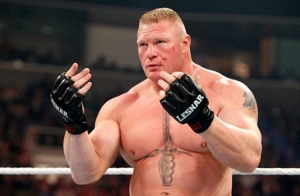 One of the most shocking stories of this past weekend came out of UFC 199. Brock Lesnar, the former UFC Heavyweight Champion and NCAA Wrestling Champion, would be returning to the company for a one-off fight with Mark Hunt. Lesnar hasn’t had any MMA action since returning to WWE and pro wrestling in 2012.

I understand if you are sitting there and wondering “Why the hell should I care?” Well, Dad, here’s the thing – Brock Lesnar is one of the few true athletic marvels we have in the world today. UFC is dominated by names like Conor McGregor, a crazy talented fighter that has better microphone skills than any other fighter on the planet, and Ronda Rousey, who – until her last fight – steamrolled her way through competitors like it was nothing. Neither one of these fighters is anything that makes you cock your head to wonder if they are human.

LeBron James is physically imposing in ways that have never been seen on a basketball court before. Brock Lesnar – alternatively known as Bork Laser – is a human hulk in that sense. He’s lightning quick before factoring in that he weighs 285 pounds and can toss around people like they are rag dolls. Look at what he did to John Cena at a WWE event a few years ago.

You can correctly assert that pro wrestling is scripted and predetermined, but there is no stage fighting here. You can bluff punches and kicks with astonishing ease, but picking up someone and repeatedly throwing them across the ring is legitimate.

Again, this guy is no joke strong beyond belief. But when you then throw in that he can legitimately fight he becomes a genuine attraction. He beat Randy Couture for the UFC Heavyweight Title in just his fourth pro fight and Couture is a star enough that you likely recognize his name. He lost his last two fights in the UFC because he was dealing with diverticulitis that nearly killed him.

But beyond all the skill he has, Brock makes money wherever he goes. Some of the highest buy rates for UFC pay-per-views and WWE events have come from Lesnar as a feature. For him  – the biggest crossover star for pro wrestling other than The Rock and John Cena, although far more athletic – to be featured on the UFC 200 card and then fight at WWE SummerSlam the next month is printing money for both companies.

We get a chance to witness a genuine monster in action soon and that’s fairly fascinating. Should Lesnar beat Mark Hunt we will potentially have a huge crossover star, and the most legitimate pro wrestler ever, on our hands. These are interesting times for the Next Big Thing.